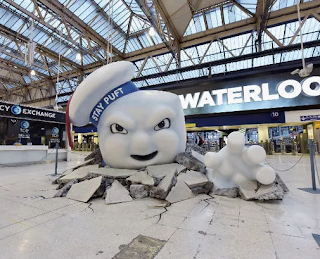 Way back in 1984 I was working in Manhattan when the original Ghostbusters opened. My parents happened to be visiting, so my oldest sister and I went with them to see it on its opening weekend.  It was pretty original and very funny.

Five years later, my friend Jon and I went to see Ghostbusters 2 at the Grandview Theater. It was $1 movie night. Let's just say, while the viewing was only a buck, I felt I was owed at least a fifty-cent refund. It was that bad.

So no one was more surprised than myself when we found ourselves looking at a rainy Saturday afternoon movie - - and there we were at the 3-D version of the new Ghostbusters.

It wasn't high on my list - and for no good reason. I knew nothing more than it had female leads. I wasn't 100% sure if it was a remake or a reboot. It is more of the latter than the former, but trust me, there are shades of the original.

The original is highly quotable...........and funny.  This one? Not so much.  There isn't a memorable line in the flick and I think I smiled 3-4 times (mostly all at Kate McKinnon and never once out and out laughed. That was kind of sad.  I even audibly and involuntarily groaned near the end of the movie.

The special effects - even in 3-D - were marginal at best, which is unexceptable with a movie with that kind of budget. One effect was just downright bad.

Almost none of the actors were bad. Melissa McCarthy played a toned down version of herself. Kristen Wiig hasn't quite made the leap from character acting to lead. She's a milquetoast version of her Bridesmaid character. McKinnon was the strongest.

Chris Helmsworth solidified the notion that he might be hard pressed to do any character other than Thor.

The cameos of most of the original cast seemed a bit forced. Annie Potts may have been the most natural. The best might have been a fleeting shot of a bust of a man who I believe was Harold Ramis.

Honestly, the movie wasn't horrible, but I'd be hard pressed to call it a comedy either. I would say if you go in with expectations of not a laughable comedy, you might enjoy it more.  If our theater - on opening weekend - was an indication,  this movie isn't making bank. I'd say 10% of the seats had butts in them.....at best.

And poor Huey Lewis. 32 years later and he still gets no co-writing credit for the theme song. I think Ray Parker Jr still has to cut him a check though.

On the plus side, we saw the shot in the movie that we witnessed being filmed when we were in NYC last September. 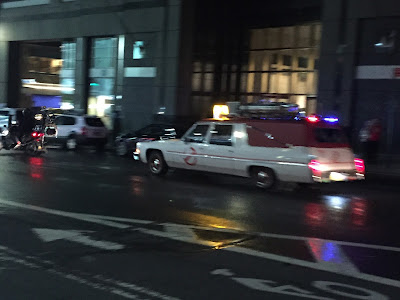 Mind you, they put CGI ghosts and stuff in and on the Ghostbusters mobile in the movie version. But I got a knowing jab from 710 when it hit the screen.

I agree about the God-awful G2, but the original didn't do much for me either, other than to irritate. With my expectations at or near rock-bottom I thought this new one (in mere 2D, alas) was an improvement on both, though without actually entering enthusiastic territory.

I had wanted to see this, but, as much as I like all the female leads, I just know it won't be better than the original.