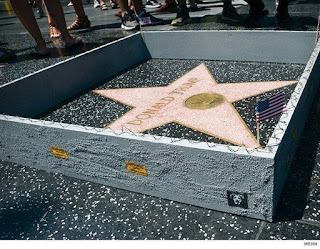 And let's really hope he doesn't win - if for the only reason I don't have to type out '(t)Rump' for the next four to eight years.

.....and then the inevitable, 'yes, it was a speechwriter who didn't vet the speech after Melanoma gave her idea from one of the women she so admires..............Michelle Obama'.

Ok.....let's go with that, shall we?  The (t)Rump campaign actually lets it out that someone in the family likes an Obama??

I still don't believe a word of it. Any of it.

The bigger lie(s) pertain around John Kasich - and Donald's campaign offering / not offering the VP slot to him.

Donny says it's "a lie" and that he never offered that role. Technically "he" didn't. Don Jr. did. So, I suppose he's off the hook on that one.

Still, who to believe?  Since (t)Rump lies constantly, and Kasich is a scum who will screw you over to your face - I'd have to go with John on this one.

I loathe Kasich as a human and as a politician. He's vile as all get out. He just plays it better than the rest of crazies that ran for the GOP nomination.

That said - I have to give the guy a little respect. He refused to endorse (t)Rump. Unlike Rubio, Cruz* and all the rest (well, except for Ms. Lindsey Graham), who rolled over and spread them for Donald full access for penetration, Kasich is a man of his word.

He hasn't endorsed him. He refused to go to the convention for his own party in his own state. And he {allegedly} turned down an office in the Old Executive Office Building.

But this is the part I still don't get.

Blatant Blatant Blatant lies. One after the other. Easily exposed. Stupid ones that in the big scheme of things mean nothing if admitted as foibles or blunders.  But Donald is like a kid who gets his hand caught in the cookie jar and tells one lie after another claiming it wasn't him.

.....and since I think he believes it so much that others feel sorry for him and let him off the hook.

I can't really think of another explanation.

And by "others" I mean the voters, the delegates and especially the press.

I get that there is no reasoning with this man, but the media must kowtow to him to get him on their stations and hopefully the ratings that go with. Yet they don't hold him to anything.

As much as I didn't care for Connie Chung - her interview with Gary Conduit was great. For the first 10 minute she asked him the same question over and over because he wouldn't answer it.  My lord, I'd give anything if the media started doing that with (t)Rump.


* I really should watch, I guess.  I hear Teddy didn't endorse Donny and was booed off the stage. That is excellent on so many levels.

Song by: Dar Williams
Posted by Blobby at 12:01 AM

It's a campaign built on lies so anything else would be suspect.

How are you going to cope all the way to November?
JP