I'm Gonna Tear Your Playhouse Down 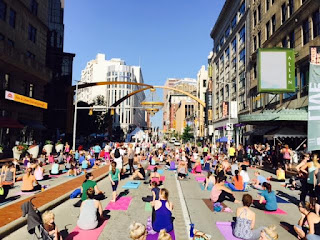 In the never-ending quest to change-up the yoga routine, David and I took out practice to the streets.

Euclid Avenue to be specific.

Cleveland has been under quite a bit of a revitalization these last few years. So far so good.

Actually, in the almost 20 years since I've been back, I think this is Cleveland's second (maybe third?) try at revitalization. Though this time seems to be the charm - or so it seems.

A decade and a half ago, the Flats, which were not only praised with the last surge of Cleveland growth has literally been razed. Drunken boating accidents that killed people,  drunk people going in the river to drown, overly aggressive bar bouncers literally gouging someone's eye out, overly aggressive bartenders and bar owners putting GHB in the water it was serving its customers sounded an early (but not early enough) death knell for the East Bank.

In theory, the Flats could be fun but you had to be drinking. If you were there for a meal before an Saturday or Sunday Indians day game (i.e. sober), the streets just smelled like vomit, piss and regret. It was way out of control - everyone lost their licenses, shuttered their doors and then the wrecking ball came in.

Now it is being redeveloped with high-end apartments, office buildings and nice places to eat. It is still a few years away from being completed.

Downtown itself has a 97% occupancy rate for all apartments and condos. Considering 8 years ago, no one lived downtown at all, that's quite impressive. There is a list of old office buildings waiting to be converted into residential space - and with an actual grocery store and ever expanding businesses, downtown is quite the viable living option. And it is something 710 and I have talked about doing.

Anyway - back to yoga.

The idea of it was nice. Set on the main street that runs through downtown. Shut down for us, but running right through Playhouse Square.

Other than NYC, Cleveland has the largest theater district in the nation. Once run down, all the major theaters (5 in all) have been restored to their heyday. The smaller ones are there too, but the main five go back to the 1920s.

The issue I have with the district are the tacky arches, which seem to be some kind of style lately, and the hideous chandelier that hangs over the intersection of E. 18th and Euclid. 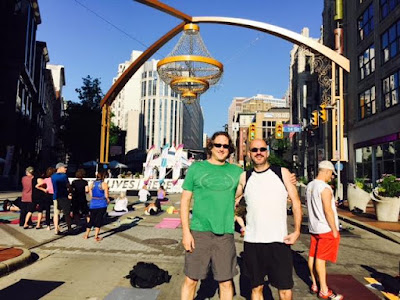 I am kind of waiting (hoping) for an 18 wheeler to "accidentally" take it out.

And the amount of stupid of theater goers is amazing. Running out into the middle of the (non-closed down street) to get their picture taken under it.

The practice idea was nice and I'm all for promoting Cleveland, but the practice itself was just ok. It wasn't strenuous, it wasn't a good workout. And Bri is all about movement - dance, almost - and while it is fun for most, it is not for me.

I don't really dance. Let alone sober. Or while there is sunlight.

But I don't think I've practiced on a 'street' before. There was no balancing poses. I'm not even sure if there were any Sun A flows. She didn't try to sell her studio too too much, nor did the tie in with a clothing store who sponsored this event - but it got us practicing outside and I'm all for that.

At least it was free.

Wow. Them are some butt-ugly chandeliers.
Liberace is rolling over in his grave.

I miss yoga. The knees finally said F U to me and physical therapy has been my game since April. The Rheumatologist has suggested one instructor that I should try in the next week or two now that the knees are getting better. I'm 51 and I see a rheumatologist, how did this happen?