As predicted, Petey went to the start of the parade, had fun with all the doggies - or most of. But then 710 took him home while the folks marched on to the old folks home.

Still, we have a few new neighbors and all have dogs. Unfortunately, not all met Petey and even some who did, I wasn't quick enough with the camera to catch them.

So let's have a go at it - though some are home shots. 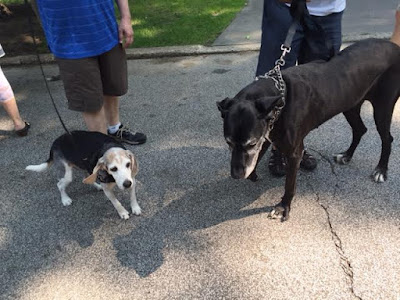 Petey really likes Esmé.  So do I. 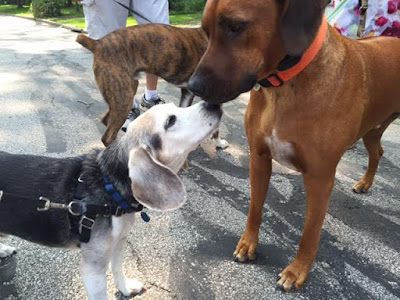 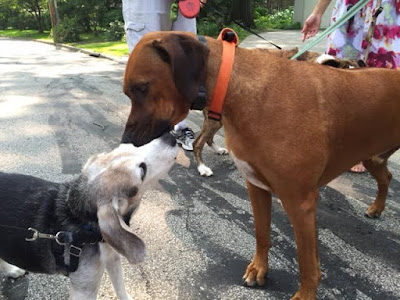 I didn't catch the name of this fella (?). He (or she) is the third most recent canine addition to our 'hood. S/He is a beautiful Rhodesian Ridgeback. Just going from the size, I'm guessing female.  (Other) Brett - your thoughts?

Petey loves an adjacent 'hood Rhodesian, Keggers. And this dude(tte) was so sweet to Petey and myself. I may have given him / her a few treats......and then he / she had her nose at my pocket, as the jig was up where I was storing them. 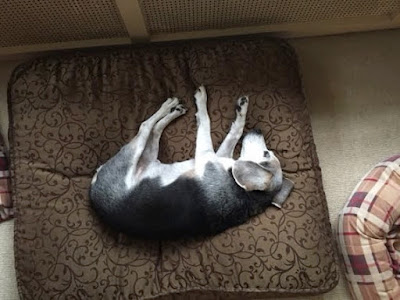 Between the heat, the doggie excitement and well, his ever-changing health state, he was wiped out.
But whatever it takes to make him comfortable, we are good with. 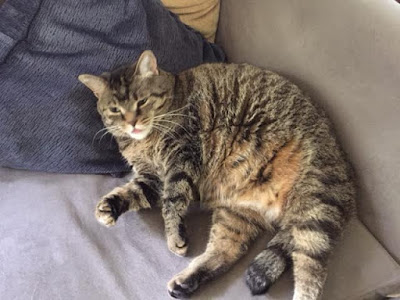 At least one of Soph. If you enlarge, you'll see her ever present tongue.

I find it a fascinating and heart-warming sight to see two dogs, hitherto strangers to one another, approach with a mutually cautious, exploratory 'sniff' - I mean, BEFORE their attentions move to the others hind quarters! (Whereas cats, if they sniff each other at all, it's to find out what the other's been eating so as to check that they haven't missed out.)

Ahhhh - this is so funny, I think about Petey whenever we are on our walks with the boys and see our neighbours with their beagles...they're white like Petey (and owned by a non-heterosexual couple....go figure).

Surely you could have just lifted the tail of the RR and seen if it was a he / she? He / she is very nice handsome, anyway!!

oh......and one more thing: RR's are very very very smart when it comes to where you hide your treats. Ours will bury their noses into our pockets rooting around for something to munch on. Needless to say we've had a few hoodies ruined because they've been left in reach of the boys and they've chewed through the pockets.

You're lucky...at least Petey is a bit too short to reach that high :)

I love Rhodesian Ridgebacks. Check out the blog http://www.oscaratemymuffin.com/ for the most handsome Ridgeback ever. We used to hang out with one at Whetstone. He'd actually rip the pocket off people's jackets if they were silly enough to store dog treats in them.

Happy belated 4th to you and the family.

Petey's quite good with the peck on the lips for the ladies!

(need to fix your blog title spelling; yes, I notice shit like that)

happy to see petey out and about. my furkids HATED the firework noise last night. so did I.

It is lovely fun to see two pooches interact and have some dog-gone fun.

Peter is blessed to have you two.

Petey is super cute as always. That Ridgeback is gorgeous too.