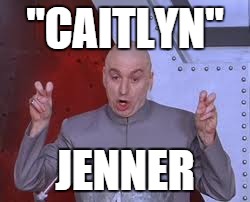 So I heard my first Caitlyn Jenner joke yesterday. Well.....I suppose it was a Bruce Jenner joke.

I was at the car dealer having my car serviced (don't ask!), and four elderly folks - and I mean like early to mid 60s - were chatting. Two were a couple - man and woman. And then just two guys, one later I would surmise used to be a police officer.

I should probably mention I was a good 25-30 feet from them and heard every syllable they uttered.

So the police guy goes:  Why does Bruce Jenner always have his hands in his front pockets?


Cue the non-laughter........well except from these four.  Oh yes, there were a good 6-7 other people in the area as well - not including staff that was going to and fro.

I suppose these four laugh at Clint Eastwood-told Caitlyn Jenner jokes too.

Well "Bruce Jenner" jokes, I guess. Not once did any one of them call her by Caitlyn.

Mind you, I already had to endure West Virginia and sheep / bestiality jokes prior to this one. So, you can see the crowd we're dealing with. Not what I'd expect from the Mercedes Benz buying crowd.

I suppose these folks just lease.

"we (meaning women) have the opportunity to wear pants. You guys can't wear dresses. I suppose he was just interested in that......but he went too far."

I actually looked up from what I was doing and looked straight at all four of them. None of them looked my way or noticed.

The words / phrases "what a shame", "waste", "unnecessary" came up.

Now, I know you know that I'm not always the most PC guy around. I like a good laugh - but it does have to be a good one. Or at least make a good logical point. This was not. And let's face it, my moral compass doesn't exactly point due north, so if I think you're wrong and insensitive, well........wow - you must really be off base.

Now, I kind of thought that police officers went through sensitivity training. Ok, I know they do. I suppose it doesn't mean they have to practice it, because clearly he took nothing away from his class. The married couple "looked" educated, but clearly it might just a look. I suppose education is an applied science.

I actually talked myself out of a learning moment for these folks. I was there first and had been waiting a half hour just to get my loaner. I didn't know how long I'd be there - or how long they would. I weighed the opportunity to give them a little 4-1-1. And while they'd probably have been stunned that someone stopped them in their tracks, I wasn't sure I could keep my outrage hidden.

I probably would devolved into questioning their son's masculinity for going into nursing. And yes, I know one doesn't have to be a gay male to be a male nurse, but if they want to work off perceptions and stereotypes, I can do that - and hit close to their glass house as I went along. Not that they'd get that was what I was doing.

And if I couldn't contain myself (and we all know I'd have gotten more and more worked up as I went on.......and on) .......I'd be forced to sit in that stupid small waiting area for what I now know would have been another 30 minutes. It would have been awkward for all involved.

I'm still kicking myself for not doing saying something...........anything - awkwardness or not.

The thing is, I don't mind with them even disagreeing with the transition, assuming they had actual facts with which to work. But Hon - Caitlyn didn't transition because as a man he couldn't wear a Lily Pulitzer dress or skorts while still having a penis.

The only shining light was when their service guy came out and told the married couple it would be better to go out to the showroom and buy a new car because they screwed theirs so badly. I don't know what they did - but it was costly. Maybe it was immediate karma retribution.

As I relayed the story to 710, he just shook his head - not so much at me, but not knowing exactly how the right way to 'confront' someone. But he also made me see, that while we are not trans, we know more about it than the average Joe - and conversations like the one I heard is where more people's heads are at than we can ever imagine.

I guess he is right. I thought (hoped?) people outside of deep red states are more enlightened than what I came across, but now I know better.

ignorant bastards (them, not you)!

we have plenty of bastards like that in this state/city. I called out my BIL last weekend over a remark he made regarding the marriage equality ruling.

when you confront the ignorant, you never know if they are packing a weapon; that makes me a bit leery to do so.

and no, not all of us 60-somethings are THAT fucking batshit crazy. not to mention rude and self-absorbed.

I have decided that I will say something from now on because i'm so tired of those 'jokes' or racist statements, or, well, stupidity.

But I do like the fact that the universe scrapped their car.

I laughed at your statement regarding Ohio not being "deep red." Sure, there are pockets of blue, but so unorganized that the GOP always manage to make an end run of some sort around them. I don't even think of Ohio as a swing state anymore; I don't think that Nate statistics guru does, either.

I just wish she had picked the name Jennifer Bruce. I dont know why, but I do. I can understand not wanting the relation to the past name though. I honestly don't know what I would do if I found myself in a situation where I had to pick a new name.
As far as those people, small minds living in small insecure little worlds...