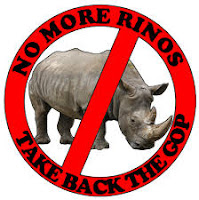 Are there still Republicans? I mean, as presidential candidates go?

I have to believe there are actual Republicans around somewhere - non-candidates, that is. But I don't know of any. Unfortunately, I know far too many Tea-Baggers.

I suppose, of the dillweeds running for president, George Pataki might be the closest thing to an actual republican - the rest are RINOs, or Tea-Baggers. So naturally, Pataki doesn't stand a chance.

The GOP hasn't always run on 'fear', but for the last two decades they have. If it weren't for Karl Rove / Ken Mehlman / Shrub in 1984, who knows how much sooner same-sex marriage would have been legal. Now it's immigration, voter restriction, trade, healthcare and Iran.

They only have plans to block things, no solutions. And they're fearful someone will see that, so they point and cry 'fire' and everyone runs screaming.

But all the candidates are so fucking scared of the Tea Party that they don't dare stand up to them, as an actual Republican. To stand up - with a backbone and a lick of logic - and you're branded unpatriotic. Or - unelectable.

So they part the cheeks and pucker up to kiss the anus that is the Tea Party - a party who thrives on fear, has gotten a few people elected (and let's be honest, it's not that many) - yet has gotten almost zero accomplished.

Tea Partiers were up in arms about the SCOTUS / Same Sex ruling saying it has no basis in the Constitution. But they ignore the 1st Amendment which says:

Congress shall make no law respecting an establishment of religion.

But that's John McCain: war "hero" and Sarah Palin-maker.  I liken him to Sarumon creating the Orc out in the Fangorn Forest with that bitch.

I do put quotes around "hero". The word is used far too often and far too easily. I think Donald Trump was way out of line in his demonization of McCain (well, actually almost all other POWs) in regards to being captured. But it goes back to the thriving on fear - which usually involves who screams the loudest.

...and we all looked. So he wins. He got you to do exactly what he wanted.

Much like the Tea Party screaming - and probably normal Republicans run to that corner for fear of being defeated, but completely missing the bigger picture.

In a New York Magazine article in 2008, their senior political correspondent said, the McCain of the 2000 presidential election wouldn't even recognize the McCain from 2008.

All Republicans - Tea Party and otherwise - seem to idolize Ronald Reagan, but for the life of me, I don't know why. They all tout his successes, though I honestly don't know what they are.  Failed trickle-down economics? Adding a kerjillion dollars to the deficit? Star wars - the military shit, not the movies? Selling arms to Iran illegally?

But I have to believe even Ronnie wouldn't recognize his own party today, much like Barry Goldwater didn't recognize it when Reagan was president.

Goldwater's Republican would be a moderate Democrat these days.

If they don't, I do fear for this country. And if they do, I fear for whomever inhabits it. I think the only thing worse for the "other party" than having a black president would be having a female one.

If we had a black female one, they all just might spontaneously combust. So.......that would be something with which to look forward.

Song by: Big Audio Dynamite
Posted by Blobby at 12:04 AM

To me, this explains the GOP:
"They only have plans to block things, no solutions"
I'd listen to them if they came up with an idea, but to block everything because Obama, and shut down a government because they're pissy little bitches who didn't get their way?
No.

the GOP = the party of fear; fuck them!

Good decisions are never made with fear.
We have proof of that in congress right now.

Donald Trump’s campaign is a ruse designed to eventually drive people towards Jeb Bush.
Jeb has a marketing problem and Trump is the distraction / solution.

In six or eight months Trump will purposely screw up, drive some of his supporters away, and stop being the media story. At that point he will throw his “support” behind Bush – our already chosen republican candidate for the next election.

alas nobody paid attention to the 2013 analysis for the GOP to change their ways. it is worse than ever.