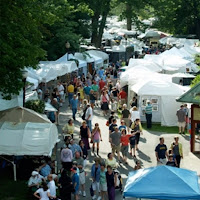 Friday we went to the Cain Park Arts Festival.  Meh.

You know the score: the same handful of artists travel from art show to art show hawking their wares. For me, I can skip the pottery and jewelry booths. And there are only so many hand colour-tinted black and white photos that one can stomach.

I think that left me with 2-3 items I actually liked. One was, oddly enough, a drawing of part of a street in German Village - in Columbus. No big deal mostly, other than it was of the house 710 lived in when he was in GV.

The vendor was a snapping prick. I think he realized it, but by then it was too late. When he said, "that's German Village", I cut him off and go, "I know exactly what it is....." and walked away.

The piece I liked the most had no price tag. WTF?  I'm not sure an event like this warranted hunting down the artist to ask for pricing. I walked. I'm not sure I was that invested.

It is really after the festival we go for - 20 or so gay men get together for dinner. Usually the same invite list. Always the same restaurant. I'm not a huge fan of Indian food (but I did eat a lot of naan), but I go for the camaraderie. And maybe the booze.

But this year there were quite a few changes to the roster. We knew only a handful of men. But we made the acquaintances of a few new ones - some that we liked very much. But since the table was one big long one (that's what she said), it was hard (read: impossible) to converse with anyone at the other end unless you got up and moved.

As it turns out, one of the gentlemen is the new director of the Cleveland Museum of Art.

He and his partner (husband?) seemed nice, but we didn't get to chat very long. Yet we made plans with two other couples - new ones - one for dinner and one for drinks. So that's kind of nice.

And yesterday, we went down to the Cleveland Flea. 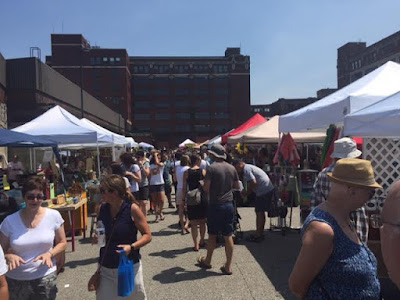 Like the art event, we didn't buy anything, but the people watching was better and the items were a bit more interesting.

Well we did buy something: lunch.  Food trucks. My choice wasn't as good as last year, but live and learn. And we also ran into two of the new guys from the night before. So that was fun.

We did get to see a good band - Sammy Slims. You can listen to his / their record, but they were much better live than they seem to be via the studio.

The crowds and parking were a bit much, but it's the price one pays for helping an event flourish in a town on the rebound.

"The vendor was a snapping prick. I think he realized it, but by then it was too late. When he said, "that's German Village", I cut him off and go, "I know exactly what it is....." and walked away."

Most of the time I don't buy anything either; I agree watching the people is fine enough.