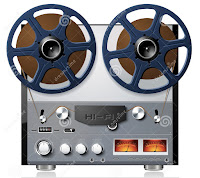 As promised, I let Erik choose the My Music Monday / Hi-Fi Friday theme for July.

Possibly no big surprise when he picked songs about drinking. I shot back my reply: no problem.

Until he responded to me:  "no country songs".

I suppose that would have been like shooting fish in a barrel, but I'm sure I can eke out four songs (though he has five Fridays) in July.

I suppose I'll start with the Cardigans and their first single from the album Super Extra Gravity - "I Need Some Fine Wine and You, You Need to be Nicer".

It's a good thing they don't make 45s any more, as this title never would have fit on the label.

The song is as much about men being dogs as it is about drinking - possibly more so. But the tune alludes to 'kill a bottle' and 'raise a glass or ten'.  And the fog of which Nina Persson sings isn't about the weather.

The song is now eight years old? older? They haven't released an album since, though they are touring Europe currently - that gives me some hope of new music. But yes, almost a decade old and I still sing along - and loudly, when it come in rotation.

Oh, I think this would be easy. Not sure if this is cheating, but:

How have I not heard this Cardigans song before?

And thank you for playing along! :)

Now I need to belatedly post mine from last week.