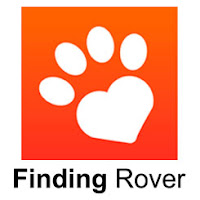 What one of us dog-owners hasn't been afraid of losing our puppy?

The two times Petey has made a break for it, I was beside myself. Microchipping helps, but only if the dog (or cat) is found and actually scanned.

We've considered those tiles to hook onto his collar so we can GPS track him should he go missing. But hell, have you tried Sirius / XM? Go under the shadow of a tree and you loose the signal from space. Honestly, I don't know how governments run their military if they have to deal with tunnels or tree cover. Drones should be crashing to the ground right and left!

And considering Petey would high-tail it to the woods / ravine, I'm not sure the technology would work for us. Since it is new(er), the service fees are kind of pricey too - not that there should be any amount we would be stingy on when it comes to his safety.  ....but he has only broken away twice. So it's a cost / benefit analysis going on here.

And this app, Finding Rover, might prove to be nothing, but at least it's free.

Their website says that 7 million dogs are lost a year. They don't specify what 'lost' means or where they come up with that number. As Petey broke free twice in a year, does he count for two of those 7 million?  And does he, since I never 'reported' him as lost.

Finding Rover uses facial recognition technology - or so it claims.

And while I love Petey and know I could pick him out of a room of 1000 beagles, honestly, there are only so many looks a beagle might have. I fear the 'facial recognition' would pick up Sparky in Des Moines and not Petey in Cleveland.

So anyway - after you register, you build your doggie's profile - as such 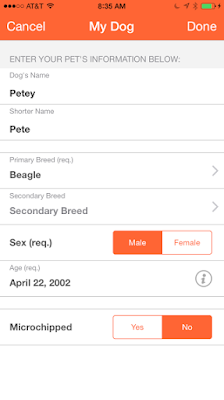 And you get a picture of him as well, for his profile. This proved difficult as Petey is not a poser. Sure I have lots of pics of him, but not where he's looking right at the cam-ah-rah (say like Jenna Maroney!).  This was the best I could do. 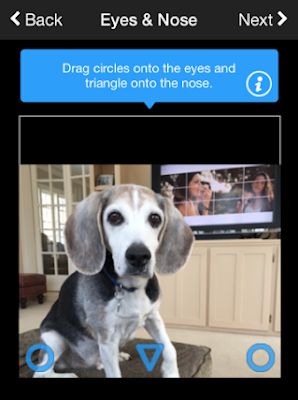 It's probably not helping my case that I have a Julia Louis-Dreyfus movie Frontline on in the background. But the app asks you to put geometrical shapes around your doggies facial parts. 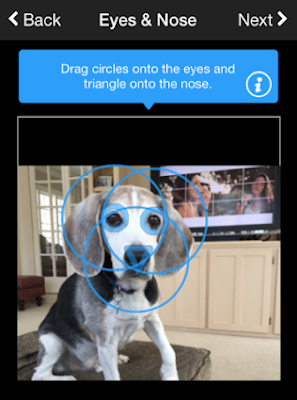 Then the app "scans" the picture. You know to separate it from all the other beagles with two brown eyes and one black nose.

I suppose it takes into account how close the eyes are together and their diameter. I suppose it could do something like that with the honker too and could weed out those freaky cross-eyed pups who have a nose like Tom Riddle.

Then there is a portion where you can report a dog missing or found. And the matching begins. But of course, one needs critical mass of this app for it to be helpful. I guess I would use it along with any other means of finding a pet, but I can't say I'm hopeful.....though NPR featured it, so maybe it's getting some legs.......or paws, as the case may be.

The Apple reviews are not glowing - 2.5-3.0 stars. Some of the lower ones were complaints on registering and I feel their pain. It took me four attempts before it would take our information. Not an auspicious start.

Again - all means necessary to find a missing Pete, assuming he even has the energy to make another escape plan.

Drag the circles onto the eyes and triangle onto nose. Thanks Blobby I have the Halloween costume all picked out for my dogs this year!

Really nice apps, thanks for sharing

thank you for sharing this one; I plan on using it.