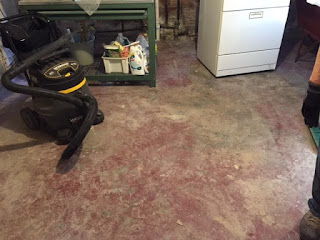 There is a reason I should not be allowed to talk to certain vendors who do service for us. Like if they do an iffy job.....or g-d forbid a bad one - I'm one to hold my tongue.  ......that is, until I don't. And then venom just kind of spews forth.

We are in a little over a month since our basement flooded. And 3+ weeks since the company I hired to do the clean up did "the clean up".

When our neighbors used and recommended these guys, I though, "ok....my neighbors are pretty good with this stuff". I got a quote - $800 cheaper than the first quote. Insurance covered it.  Then two schmoes came out and did the work. With our neighbors they were there for over a day. For us, less than 90 minutes.

I raised an eyebrow when 710 told me they were done and gone. On the plus side, the guys said the pricing wasn't anywhere near what we had been quoted ($900 cheaper, actually), so I thought, 'cool, we can pocket the extra dough the insurance company paid for'.

Let's start with that the worker bees said, "we don't pick up x, y and z - you have to do that before we can start".  I was stymied, but 710 and I went to work while they sat in the driveway. So they actually started work 30 minutes later than scheduled. I started questioning - if they cleaned up basements, why are WE cleaning up ours first. It's the equivalent of cleaning the house before the maid gets there.

I was told by the company that they would bring and leave fans for the basement to dry and they'd pick them up the following week. None of that was done. We had to get our own fans to do that work.

I will admit to not going down while they worked. I know what was to be done and made the silly assumption they did too. And maybe they did, but they didn't do it.

What you see at the title image was before they came. What you see below, is how they left us. 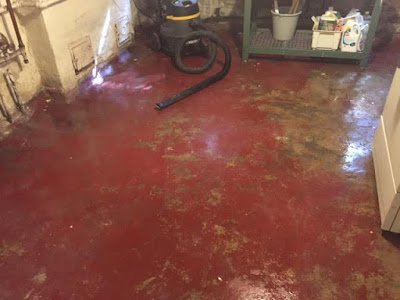 Ok. It looked better. The grey is just unpainted floor.  ......and then it dried. 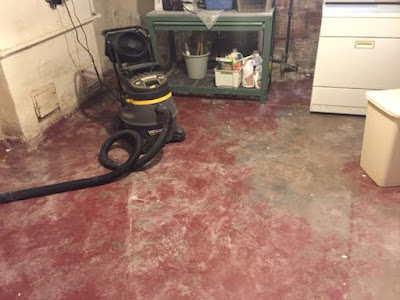 Granted it was better than the title image, but c'mon: this is not clean!

So they could not get 710 on the phone and unfortunately they got me. Me who started firm and ended up just kind of losing it on them. "We never got a call or an original email" they says. (liars). Our workers can't give out pricing - let alone reduce it ("then why did they ask for 710's credit card?). Where were the fans? Why were they here less than 90 minutes but across the street for a day and a half? Why did we have to clean our own basement floor?  and of course the kicker: why is there still mud and dried sewage still on our floor?

Granted, I put them on the defensive, but they started a blame game - so you know how well that sat with me. And for the record - they answered none of my questions. Not one.

Since they were asking some questions back (the blame part on email and phone), I said, I would have 710 call them, but won't answer for him.

To my credit, I never once brought out the ultra-bitch card: their ad. Embiggen if you need.

I desperately wanted to ask how they could possibly rid a structure of a deadly virus if they can't even clean a fucking floor.

I am the model of restraint.

If you lead with fucking Ebola, you had better be able to eat off the fucking basement floor.

So I talked to 710 and let him know I kind of imploded on these folks and sorry for what he was about to walk into. But they came back out yesterday 100 minutes later than schedule (and the owner who was supposed to be there was a no-show!).

The floor is clean, but clearly needs to be painted. 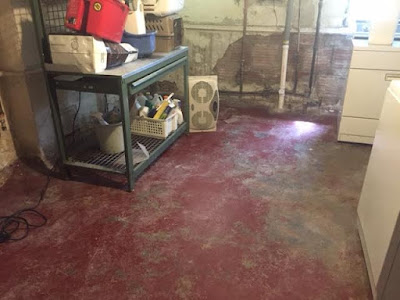 ....but it ain't gonna be by them. I'd rather make a Homo Depot run and do it myself. At least that's the plan now.

You're a more patient man than I, for i would have lost when they sat im my driveway while I cleaned the basement.

It looks clean, but I'll bet they intentionally smeared some leftover ebola on it from their last job.