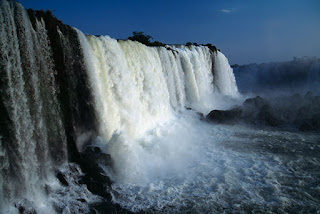 I contemplated using this as my Site of the Month but changed my mind. I'm sure I'll live to regret it, when I can't come up with a better Site category.

This Julia Roberts narrated video dates back to 2014 and it is part of a series concerning the environment.

Harrison Ford does "the Ocean". Edward Norton does "Dirt". Lupita Nyong'o is "Flower". Penelope Cruz is "Water" and Creepy Kevin Spacey is "the Rainforest".

The video series is presented by Conservation.org.

Oddly, it is Roberts' video that really struck a cord with me - and I'm not even a fan of hers, per se. Sure, the other videos are in a similar vein, but this one is somewhat all encompassing - and it rings true.

Ford's takes on a somewhat nastier tone - one that anyone disagreeing with "his" view will readily write off. I find it harder to do that with the "Mother Nature" clip. Though the photography for the Ocean is spectacular.

You can infer that the clip leans heavily toward Climate Change, but it really doesn't - not if you really watch and listen. It's broader than that.

The reality is - it is true. Even if you assume no inference from the Conservation group. For as long as we have been here and taken resources, or even just shared them, nature prevails - one way or the other. It adapts.

And Mother Nature is right - how we choose to regard or disregard her will determine our fate. So whether you think climate change is real - that is one thing. That we pollute the water, strip the land, put toxins into the air - is really non-negotiable. It's a fact.

Though the religious folks must be fucking up in arms saying that Mother Nature has been around 22,500 times longer than man - and that "she" is older than 4.5 BILLION years.

And the deniers are all over these videos. With this video less than two minutes in nature - and YouTube has video responses that go up to 39 minutes!

It seems that Conservation.org has struck a nerve with someone. So they must be doing their job.

Email ThisBlogThis!Share to TwitterShare to FacebookShare to Pinterest
Labels: Site of the Month, video

I find many deniers claim to follow a certain "bible". Funny how they seem to miss the good Shepard message in that book.