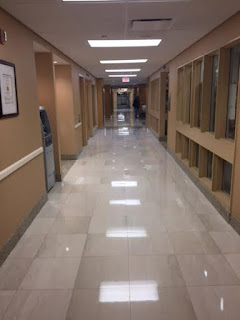 Yesterday I went and did the "right thing".

He's a widower and has no kids. It was the right thing to do.

Clearly, while he might have thought I'd visit, he must have talked about my cousin. When I walked in the room, the occupational therapist asked if I was Tim.

Not missing a beat, I said I was Tim's much younger, more attractive cousin. And without missing a beat or even looking up, Tom said 'and he's blind'. "He" meaning me.

Until very recently, Tom has been very independent - including driving. Now he's just in a constant fight with my cousins about driving and living on his own. He admitted he's fine with not driving or his living arrangement, but now he kind of just wants to stay put to spite them.

He has the means for live-in help or drop-in help if he chose to stay in his house. And after dealing with my father's end-of-life wishes, I'm ok with him staying at his residence.

There is also talk of Tom coming to live with his sister - my mother.  Oy.

In theory, it's great. They are both alone. They are family. My mother has more than enough space.

If that happens, I give it 18 hours. But at least that 18 hours would give 6-7 weeks of stories from each of them - neither of them being remotely alike.

But I was regaled of stories of his brother (another uncle of mine who just turned 97!). And I asked about my never-ever talked about grandfather - who left when my mother was around five. Tom called him a "carouser" which is a nice way of saying "alcoholic".

My grandfather left after getting into a physical altercation with a then 15 year old Tom. He called Tom a "14 year old punk" and Tom took offense to being called 14. At least that's how this version goes.

It was a nice 90 minute visit. He might get out this weekend or probably the beginning of next week when they determine his treatment plan.

I do have to say, even though it wasn't the same hospital my father was in, the sights and smells of 2014 cam roaring back. And while I've spent the majority of my adult life working in hospitals, those smells never seemed so prevalent. I suppose now I just have associated connotations.

Anyways, the next few weeks with him (and my mom?) should prove to be interesting.

Song by: Electronic
Posted by Blobby at 12:09 AM

If this happens, I see an entire series of blog posts: Tales From The Front

My daughter once considered working for Visiting Angels
and my parents, in their 80s, said 'no, don't do it!!!'

Wow, quite the longevity in your family. It was really nice of you to visit your uncle.