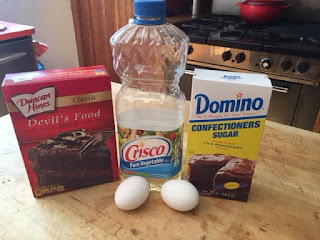 I haven't made cookies for weeks. I've been trying to be good, but you know, we still like something sweet after dinner. I won't lie.

But I've been lazy. Which probably isn't a bad thing for the waistline when it come to cookie consumption.

With the weather lately, the last thing I wanted to do was turn on the oven too. But it was in the high 60s, and early in the day, so I went for it.

Another new cookie, but one where I had to do as little work as possible and clear out the cupboards at the same time.

Another cake mix to cookie recipe. I liked these much better than the last go-round. And believe it or not, even fewer ingredients!

The batter took almost as long to mix thoroughly as it did for the cookies to bake. Clean-up was in two stages (while the cookies baked and the cookie sheets after they were done). All done in record time. I was in and out of the kitchen in a half-hour. Tops. 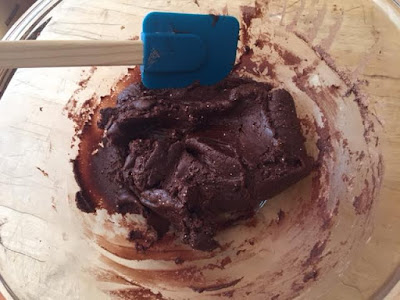 Add first three ingredients to a bowl. Mix completely. It is thick and becomes hard to incorporate, but this is almost all the work you'll be doing, so get over it. 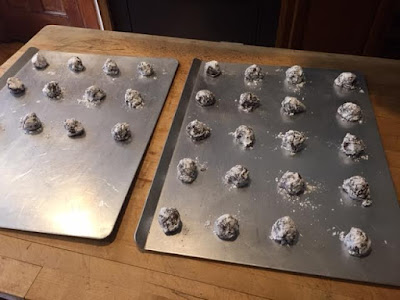 Scoop into 1" balls. Probably better to let them sit for a few minutes before covering them in powdered sugar (or granulated, I suppose would work). I put 2-3 into a bowl of sugar coated them and put them on the ungreased baking sheet.

Place them 2" apart from each other and put into a pre-heated 350F oven for 8-10 minutes. I rotated the sheets half-way through cooking time.

You can see that it makes about 32 cookies. Not bad. 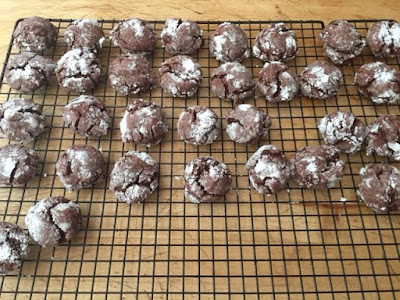 Let them sit on the baking sheet for 1-2 minutes after taking them from the oven. Then let them cool on a rack.

Some of the sugar stayed on, some baked kind of into an icing or glaze. But even the powdered sugar wasn't messy.


I'll be honest, I didn't taste test them until after dinner and 710 was the first to bite into one. He love it. So did I.

I suppose they are like a non-chemically filled Snackwell.  But they tasted so much better (from what I can remember of those cookies).

I've only had two of these, and I would definitely do them again.
Posted by Blobby at 12:01 AM

Email ThisBlogThis!Share to TwitterShare to FacebookShare to Pinterest
Labels: Baking with Blobby

I have yet to make cookies from a cake mix, cause I am with you - in all this heat, who the hell wants to add a hot oven to the mix!

I just made these not too long ago myself. I used a lemon mix as well as the chocolate and they were a hit.

Suggestion: make a batch of Bittman's basic cookie dough, roll it up in log shape and store in plastic wrap and keep it in the freezer. When you are hankering for cookies, cut off the discs that you need, place then on parchment and bake in the toaster oven.

Of course, this does not lend itself to dramatic blog posts unless you start including you variations on the basic cookie dough.