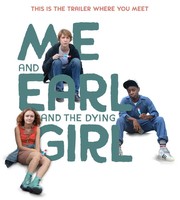 Imagine that - we are on top of our movie-going for 2015. Possibly even a little ahead.

So far 2015 has been a decent year for movies, though I probably could have forgone Jurassic World.

Oddly - I think - we have gotten at least half of our movies from previews we have seen elsewhere. More of the art house ones, than say the megaplexes, though there are a few of those coming in which I want to take a look-see.

But this was one was a kind of cross-over. Me and Earl and the Dying Girl is showing at both the art house and the big screen theaters. At least here.

It has all the elements of a could-be cheesy teen movie: high school misfits (check), upcoming prom (check), student in crisis (check), nerdy hobby (check), left-of-center parent(s) (check) and the one wise adult (check - and check!)

On paper, it's all been done before. Think Juno - just substitute pregnant girl for an ill one. Think (well I'm assuming, as I didn't see it) the Fault of Our Stars. To a degree, think on parts of Superbad or Boyhood.

The story is more than decent. The acting - especially amongst the high school student players, the main ones - is well above average. Actually, the adults - all of whom I normally really like (Connie Britton, Nick Offerman and Molly Shannon) - seems a bit more forced and sometimes over the top. But the tatt'd up history teacher is kind of hot.

Thomas Mann, as the main character (the 'me' in the title....or Greg) is a wrap-up of what many nondescript high school boys think of themselves: quirky, insecure, unattractive, self-deprecating, not likable, invisible. It's been played over and over again in other films and yet it truly works here.

'Greg''s haircut and mannerisms alone was unnerving as to how much he behaved like my nephew - who is only a few years older. Maybe it's something about the generation. I got the same vibe in Boyhood.

The girl is good too. Not too weepy. Not too feeling sad for herself - considering her circumstance. Only 'Earl' get the short shrift. I don't know if I expected more from him - or from the filmmakers, as he is in the title. He's treated more or less as a somewhat minor character.

It is Earl's and Greg's hobby that cracks me up. They remake classic films (or semi-classic films) - which are truly bad, yet funny. While you don't see that much of them, the titles are hilarious. 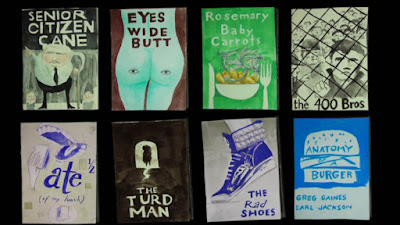 If you see the movie, stick through the credits, as they list more movie titles that whiz by during the movie that you can't take in on a theater viewing.  I do believe, my favourite was: the Last Crustacean of Christ.

There is the pop culture reference (Pussy Riot), that will be a wiki look-up for anyone viewing the movie in six years, but it made me laugh in present-day.

710 wasn't sure about going to this, but he enjoyed it, as did some friends we ran into at the theater. The previews were good enough to put it on, and keep it on, my radar. It is a solid B+.

Song by: Joy Williams
Posted by Blobby at 12:06 AM

Haven't heard of this one but from the details you give it sounds like the kind of film that I most dislike. When the reviews come out I'll bear your recommendation in mind and might, just might, toddle along.