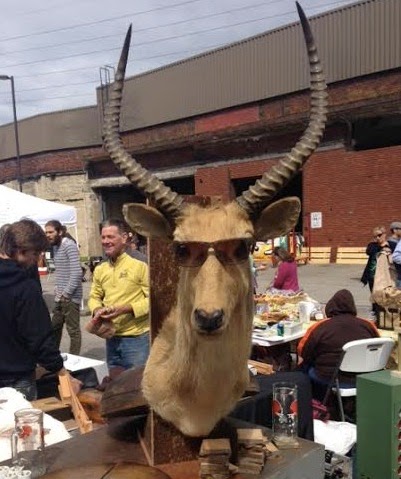 We did something new yesterday - 710 and myself. We went to the Cleveland Flea.

Maybe I'm missing something when people go: "what is that?" Because to me, it sounds fairly self-explanatory. I mean, unless one is into entomology. Or works for the CDC.

It's a flea market, people. Nothing more. Nothing less.

I mean, where else could you buy an impala head wearing a pair of Ray-Bans?

I've known it's been around for a bit, but just never made the time and always forgot the actual schedule. And when I thought of going, I feared I might be talking 710 into an activity in which he might not want to participate.

Yes, there was some crap there no one in their right mind would buy, but there was some cool stuff too. Plus a lot of stuff for more younger, hipper folks than ourselves. Clearly.

They had music too. A DJ playing really good music that I'd never heard and a live band that would have made Morrissey want to slit his wrists.

And most importantly, they had food. Vendors selling their wares in terms or artisnal breads, chocolates, etc......but they had food trucks. We looked around but settled on Wholly Frijoles. 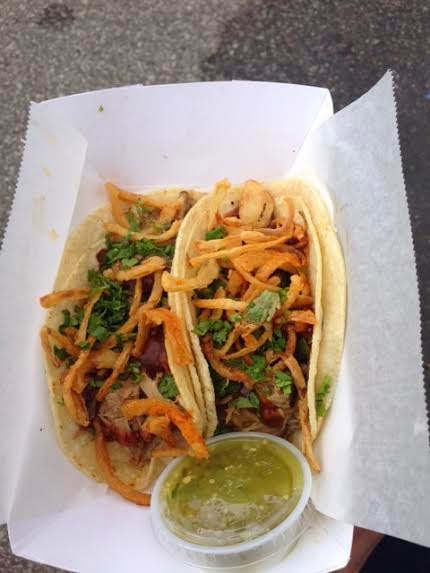 Two carnitas and two carne asada tacos. We shared, so had one of each. (I liked the asada more, 710 like the carnitas better.) 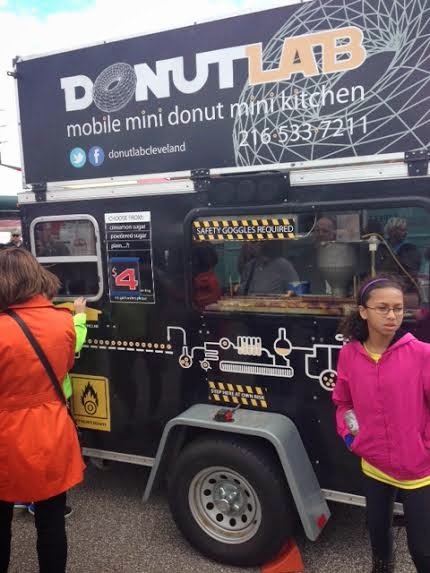 Well....science and oil and sugar.

Song by: Herb Albert & the Tijuana Brass
Posted by Blobby at 12:05 AM

I must confess, when I saw this post's title, I started humming the song. yeah, I'm not a hipster either.

personally, I never got the appeal of a flea market.

I love a flea market. I love seeing what other people think of as treasures, and I love finding a treasure.
Plus, donuts and frijoles? I'm in!

flea markets sound fun, not only for the precious objects but to people watch. I'd love to go.

I enjoyed CLE Flea when it was at the Slovenian Hall...great people watching, food, and they had a bar making very good Manhattans. A fine way to spend a chilly day.

Sounds like fun. Food trucks haven't 'caught on' here yet.

Did you buy anything other than food?