I'm in a Philly Mood 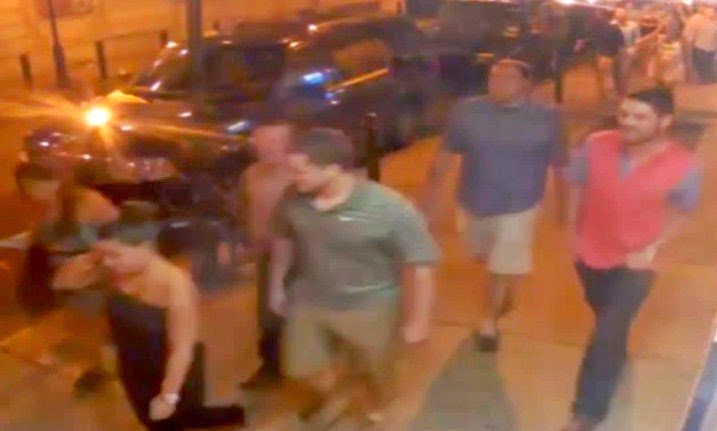 You've heard about the news by now. Well some of you have......or at least some of the news.

Two gay men were beaten up - one now with his jaw wired shut - (allegedly) by a large group of 20 somethings who had once attended Catholic high school together. In surveillance video, there seems to be at least a dozen folks. In the picture they took at a restaurant they were at shortly before the assault, there are more than twice that many.

Yes, not only did this take place in the City of Brotherly Love, this was perpetrated by a the followers and disciples of Jesus Christ.

Of course, the lawyer for some of those involved, claim the two gay men started it and threw the first punch.

I've seen enough Law & Order (pick any franchise) episodes to know that you get those 12 or so into a room individually and each of their stories will be radically different.

But here's why their story doesn't hold water - too much of it, if any.

And for argument's sake, let's say one of those two guys throw the first punch. That warranted a knock down, drag-out fight?  And why was their wallet and phone taken by the group?

And better yet, no one - NO ONE - in the group, reported to police they had been assaulted? I mean, until after they were caught?

Oh, Father Flannigan is going to hear some fucking doozies in confession this week!

One he might not be hearing from is one of the guys who worked at his alma mater where he was basketball coach. Worked. Past tense.

Silly gay-basher. Has he learned NOTHING from the archdiocese???  Had he just fucked / raped the victims, the church would have gladly moved him to another parish / school. No harm. No foul.

As for them getting caught - well, welcome to the new digital age. You don't need the NSA to be spying on you. First off, the surveillance tapes were remarkably clear.  Secondly, it took an average citizen to deduce from a Twit pic, the restaurant at which the gang ate, then checked that place on Facebook and not only did said group post that same pic, but tagged each and every fucking one of them with their names.

So, if the gang's story doesn't hold up, they still can't be charged with a hate crime, as Pennsylvania doesn't have those on the books.

Personally, I'm hoping one of the accused folds like a house of cards and rats on the rest of them.

I personally am disgusted with some of my city's lowlife white thugs. the gay couple were doing nothing other than minding their own damn business.

I wanna see jail time for these thugs!

I hope everyone involved gets fired, punished, jailed, for their actions.

That said ... though this was said in sarcasm:

"Had he just fucked / raped the victims, the church would have gladly moved him to another parish / school. No harm. No foul."

And the coach was HOT too! A little rapey-rapey from him might not have been a bad thing!