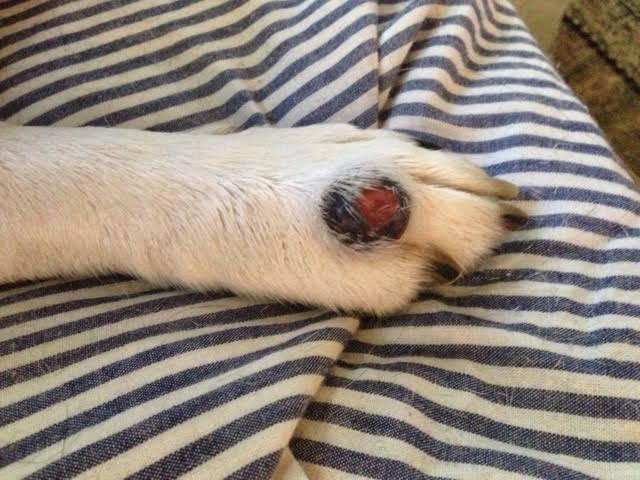 That owie on Petey's paw just looks bad, doesn't it?  Actually, it looks much worse than when he was at the vet just two weeks ago.

We went back and forth over whether it was wise to put a 12.5 year old dog under even light anesthesia. I looked at some of the "alternative" options, none of which seemed conclusive in their end-results.

After those ran their course, he still might have needed to be surgically removed.

While the circumference hasn't gotten much bigger, the cyst is higher. And Mr. Pete has gone into continual licking mode, which is why you see red instead of just black.  He's licked it raw.

Even with the alternative treatments, it would have meant weeks (i.e. months) in a cone - and again, the alleged cure was a mixed bag, according to all who wrote about it.

Yesterday, he started slightly limping on our morning walk. I figured I had done the right thing to schedule this now.

Any later in the Fall and I don't know how we would have done it in terms of going outside and walks. That means, we're already in the low 40s at night and we will have snow sooner than I care to believe.

I'm not 100% sure how he'll be returned to us. Granted, there will be a cone, stitches and antibiotics, but I don't know if he'll have some kind of bandage as well. By all accounts, we'll have to soak the paw frequently to make sure it remains clean.

I suspect his future walks will be trips to the yard to do his business and then back in. He won't like that. Petey loves his walks.

But it will be our job to keep him pain free and bacteria free as well.

Song by: Annie Lennox
Posted by Blobby at 12:01 AM

MOJO for petey! and l'shana tova to you and your family, blobby!

Wishing Petey and his dads all the best for a speedy-Petey recovery!

awwwww - big hugs to Petey from Holden and Harley! Holden actually had surgery on his paw on Friday last week for a growth, but they did a 'light' anaesthesia and he was up and out within 30 minutes of the operation.

Here's to a Speedy Petey Recovery!