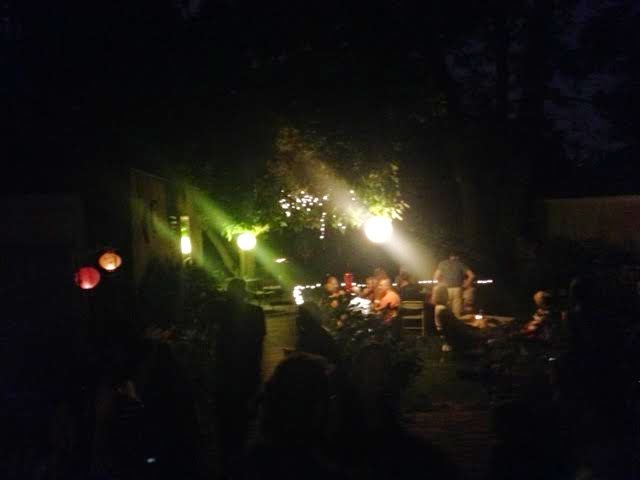 Saturday, I ventured down to Columbus, while 710 stayed home with the kids.

Friends, George and Morty, had a non-annual house party. As often as I've spent time with these guys, I've never attended this shindig and wasn't sure I was going to this one.

710 encouraged me to go, thinking that with recent events, me going would be good for me.

If nothing else, it gave me a few hours to release some tension.

I'm pretty good in social situations where there are lots of folks, though I don't know many of them. But here, I could count on one hand (well, maybe one and a half) how many people with which I'd be familiar.

I "surprised" Georty, since I didn't actually tell them I was coming down. Mort had his suspicions since I ignored a text from the night before as to if I'd be attending.

Even being 20 minutes fashionably late, I was still one of the first folks there. I was hoping to sneak into the crowd and have Georty just stumble upon me. No such luck.

Until Meredity arrived (finally!), I was the second oldest (not in age!) friend of Morty's there. A high school friend of his was there as well. If I'm remembering correctly, it was he and his wife who brought a six pack of Schlitz. Apparently, we time-traveled back to 1978 to pick that up.

Still I met some of their newer neighbors and some of Mort's Ironman peeps, who eventually identified me as the go-between who inadvertently pimped-out Torn and Serge as tour guides to Montreal.

I'm glad I made the trip. It was a good outlet for me. It was good to see friends. And I even got to have b'fast with Georty the next day, which was great.

We had over 80 attendees. It would've been possible to not even see you if you played it right. SO glad you made it.