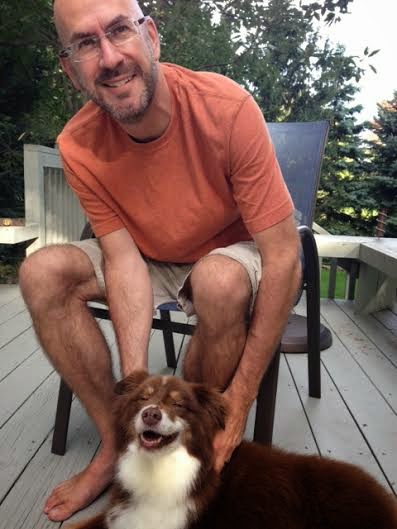 This is Boomer. You remember him, right?

It was Petey's brother. Well, he still is. They just live different places. Before Petey became ours, we'd rescue he and Boomer from the kennel a few times a year.

Don't you love his smile?

My mom was taking care of Boomer for the weekend while my sister was out of town. I think she liked it and it was a great distraction for her.

710 and I went over for a bit on Sunday - not just to let her feed us - but to see how my mom was doing and to maybe give her a break from Boomer, as it's been quite a while since either of my parents were dog owners.

But Boomer was happy to see us. Thrilled even. But he's a good dog, unless he's around other dogs - other than Petey, that is.

Boomer has doggie anxiety. The poor guy is even takes doggie Xanax....and it doesn't help him that much. He will shake, almost uncontrollably, when around another dog. My sister has spent tons of cash on classes and canine behavioral specialists (the DogFather).

Sometimes Boomer can walk with other dogs, but mostly not. But he loves loves loves Petey - and my sister's cats. Just not other dogs.

We couldn't bring Petey to my mom's house this last weekend. While he is doing really really well in his convalescence, he and Boomer roughhouse.....and while Boomer is mostly fluff and is oh so light, I didn't need him stepping on, or tripping over, Petey's injured paw.

Still, I got a picture with Boomer (with both of us smiling, thank you!) and sent it to my niece and nephew. Naturally, being twenty-somethings, they couldn't bother to respond....even though it was their own dog.

both of you are cute! how is your mom doing?

I remember that smile! Do you remember me?

I just read back to the last post I remember reading. It's been a while, but I think the brain clouds are clearing out. It feels good to have you back in my daily routine.

cute smile on both of you