Eulogy for a Rock Band 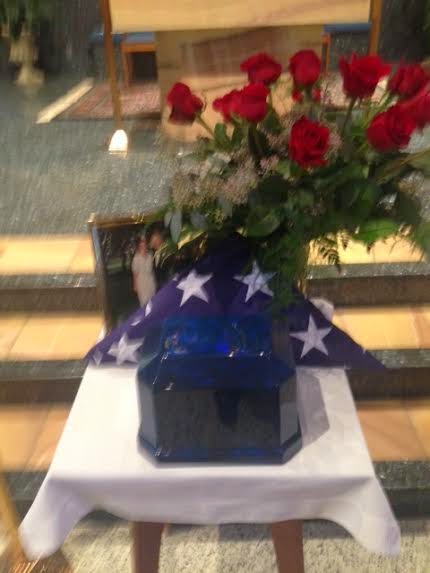 Last week I delivered my first eulogy. Probably not my last, but.....well, one never knows.

My mother finally decided to have a small memorial for my father. It was larger than I anticipated, due to her quick turn-around on wanting to have it and when to have it. Most of the timing was based on two of my sister's schedules, on when they could be in town.

Some family was there - both on my mother's and father's side. Some long time neighbors. Some of my mother's old work folks, with whom she keeps in touch with - clearly. And some friends - of both mine or my sisters.

Most - if not all of - my father's cohort have passed on. But they say these things are for the living, though that only seems to be partially true.

While there was the seemingly required reading of what I call the Byrd's bible verse (turn! turn! turn!) my mother didn't really think about anyone giving a eulogy of any kind. Of course, I offered. And while she claims to have agreed to it, what she really said, was 'let me think about it'.

Honestly, it was only 15 minutes before the beginning of the service when I asked her again, and she said she thought I was doing it. Right then was not the time to question her recall of memory as to what she had stated 2-3 days prior. She was a little fragile.

Having never given one before, but having seen quite a few, I knew I wasn't going to hit the best of them, but knew I wouldn't tank either. Or at least hoped I wouldn't.

My cousin, Bill had his law partner (also named Bill) give his eulogy few years back. Afterwards, I told (the alive) Bill that when I die he could give my mine. It was just that good.

But I've seen people go up there and be a crying mess too. But not in a 'happy we knew you' kind of cry. More of a 'what am I going to do now' kind of wail. Well, if that is for the living, there may as well be cyanide punch after the service.

Mine, I hope, was timed well. Not too long. Not too short. There was meant to be a combination of humour and heart, and I think I achieved that.

I've long ago gotten over my fear of public speaking. Oddly, I think video blog posts have helped. They are unscripted and I've seen a reduction in the "um" and pauses that most people speaking to groups give.

I won't say my eulogy - if that's what mine could be called - was unscripted, but there was nothing written, not even notes or talking points. While I knew many in attendance, I didn't know all, so you never know how personal to take things, or not.

Seeing that my father's brother was there, I did omit a few things i thought of saying. Nothing bad about my uncle, but some family quirks that my father inherited that you never know if it would be something that would make his sibling laugh or take offense. Since I had not seen his brother in 28.5 years, I opted to just delete those.

While I felt comfortable doing all of this and in this setting, it's still a blur. While I hope I made eye contact with the group - I remember only seeing Morty, Rebecca and my mother in the seats. I hope I stood up straight. I hope I didn't "um" or "ah", or at least too much.  710 claims I did not, but I'm not sure I can trust him.

I kind of flubbed a few things. I forgot one anecdote I wanted to put forth, but totally went blank on and remembered only after sitting back down. I also called one of my sisters by her full first name, something she has never been called since she was maybe five years old. I have no idea where that came from.

710 did say days later that my talk made him tear up. Morty said the same thing, especially when my mother got up to come and hug me after I had finished.

Sitting back down. One of my sisters leaned over and whispered, "how did you do that off the top of your head?"

Well, in my head, I'd been writing the eulogy for weeks. Maybe months. Bits and pieces here and there. I'd been editing and refining some of those tales as I'd drift to sleep on a nightly basis. I never thought, or felt the need, to commit them to paper.

Afterwards, we gathered for food - since that is what one does at an event like this. While I didn't think I did anything special, I was amazed how many people - familiar and strangers alike - approached me to thank me for what I said, or to tell me what a good job I did.

I wasn't looking for accolades, but truth be told, it was nice to hear that I didn't suck. Which is what one of my brothers-in-law said. Perhaps he was being the most honest, even if he was just joking with me. I think.

Even one of the food workers in the hall, setting up lunch, told me she thought it was a great tribute to my father. I'm assuming she sees a few funerals per week, so she'd know. And since I didn't know her at all, she didn't have to say it so, maybe I didn't suck.

The mingling and food stuff was nice (well....the food wasn't) but you know how those go. You get 30-90 seconds with most people. The folks you want to see you don't. The ones you want to have a good conversation you can't, though my first year college roommate was there. But he lives near my parents, so had heard about my father's death. Still, it was nice to see him.  ....and his mother, who was always like a second mother to me.

Before it was all wrapped up, I went around and thanked the catering and hall staff for doing such a nice job. I think they were grateful someone noticed their work, though once came back and said, "let's not make this a habit".

It was probably a stock line she uses with all funeral stuff, but I laughed nonetheless.

And just so you know, not that I'm wishing ill of my mother, but I've had the first line of her eulogy written in my head for about 10 years now.

write that line down!

how is your mom getting on? is there someone to look after her needs?

Yeah I've had my father's run around my head a few times this year. They seem to have gotten the cancer beaten back for the moment so now it's on hold. It's a funny process to think about, funny as in strange. I've had good and bad things crop up in the thoughts. Memories I had long pushed into dark corners. It's good to see them again, helps me realize he is human just like me, we've both made mistakes and we've both done good things as well. The thinking of it has helped me forgive him for things I couldn't when I was young, and to grow from remembering my own mistakes along the way.

I was in tears before you opened your mouth. It was perfect.

I'm sure the eulogy was just fine-- sorry you had to give it though.