This month we aren't even talking about actual weird-ass or funny named products of which I seem to stumble over.

No - this month is is about renovation.

Cleveland, once again, is having a bit of resurgence. Downtown Cleveland, that is.

Downtown, to a degree, was thriving back in the mid-90's and then it all imploded. But it is on the way back. Some really really good restaurants, new hotels and businesses and even a casino.

But the big boom has been downtown apartments. Occupancy is at a staggering 97%. Rents are not cheap, because they don't have to be (Econ 101: supply and demand). Many old or vacated office buildings are in the process of being converted to apartment or condo living.

The problem with this was (now past tense): there was no viable place to buy food downtown. Groceries, that is.

In that spirit of renovation, the former Cleveland Trust Building has been turned into a Heinen's Food.

A friend of ours, John, was the architect on the project and he did a great job at maintaining the old - including refurbishing the original place and artwork - while making it usable for shoppers.

While there are many young residents downtown, many who are "our age"  - the boomers - are relocating there as well. Ditching the houses and suburbs for city living. It is something we have discussed and honestly, if it weren't for Petey, we'd do it sooner. But it's too easy to just let the dog out when he needs to pee, as opposed to dressing, taking an elevator ride and walking on no grassed areas.

But, it's still in discussion possibly in the next few years to happen. 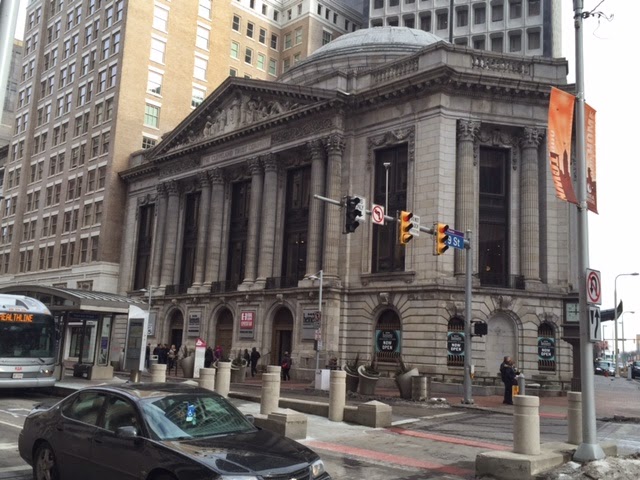 Here is the exterior of the old Cleveland Trust at the corner of E. 9th and Euclid. 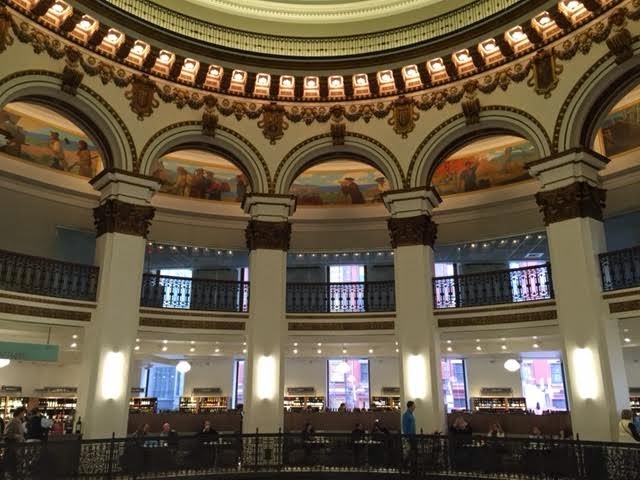 The rotunda. The second level is mostly beer, wine and spirits. The third level - at least for now - is unoccupied. 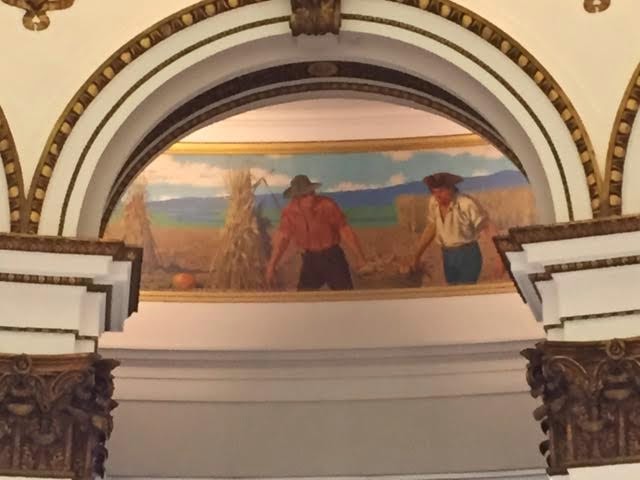 As stated - they did a nice job preserving and cleaning the original murals that make their way around the rotunda. 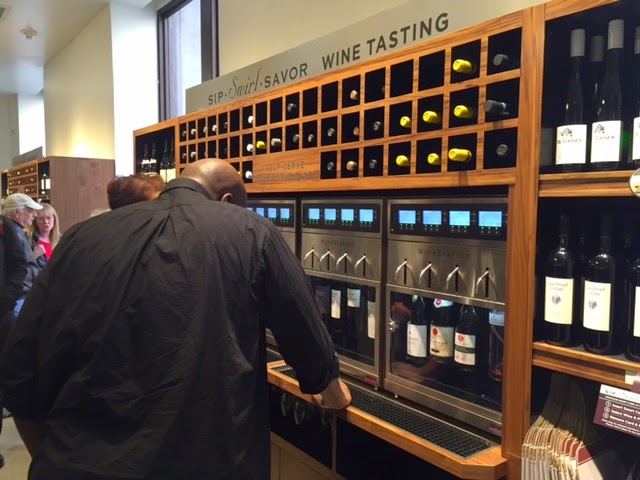 For the 'of age' crowd, they even have wine and beer dispensing areas where you can sample different beverages. It's not open like at 10:00, so it's not like a bar. 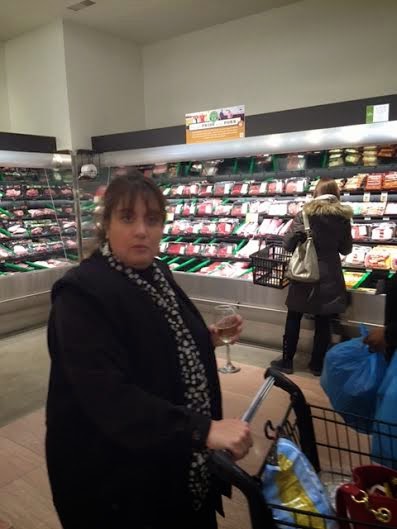 ....and you can drink while you shop. You gotta figure that has to be good for unintended purchases. Lots and lots of tipsy impulse items. 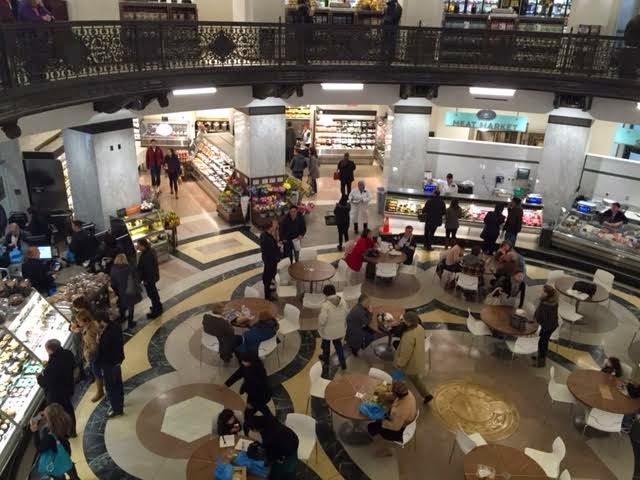 The lower level has your standard cases of meats, cheeses, prepared foods - and a place to sit and eat. There are also the typical rows of groceries off of the rotunda. 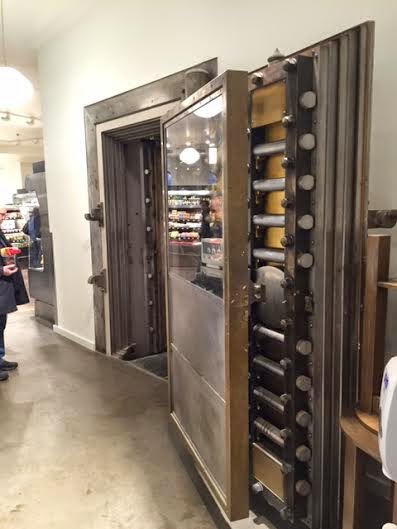 Even the bank vault is now the manager's office. 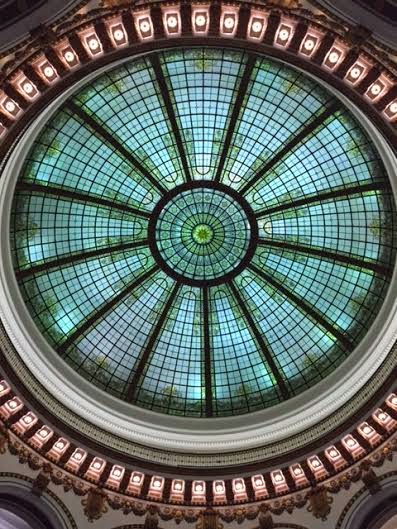 But clearly the centerpiece is the stained glass rotunda ceiling.
No one is 100% sure (or unsure) but the work might be Tiffany. We'll just pretend it is .
(and it is seemingly impossible to get a full shot with the iphone.)

John & Co did a nice job on the space and it was bustling when we went down - sure some of them were gawkers and a lot of drinkers. It's the new happy hour place. We tried not to be lookie-loos and actually bought 710 some coffee and then we picked up some chicken and potatoes for dinner.  ...and perhaps some cupcakes.

This is not a place we would normally do our shopping. We have more convenient places to pick up groceries. Even for downtown dwellers, there are some inherent problems. If you're not just buying a few things you can carry for blocks back to your apartment you'll need a car (or Uber, I suppose).

The one potential drawback is the lack of parking - or should I say, free parking. Plenty of lots to use (some of which will validate if a certain amount is purchased at Heinen's). That won't help much during event nights when there is no vacancy in said lots.

Still, a full service grocery store downtown is a huge step forward. We'll have somewhere to buy grub when we finally move downtown...........in a few years.
Posted by Blobby at 12:04 AM

FAB use of a splendid space! our local "whole paycheck foods" has one of those wine tasting dispensers.

Wow! Looks wonderful. The West Side Market is not too far away. We need to come visit brother in law's this summer.

I have died and gone to heaven.

And to top it off, what a great repurpose, and salvage, of a glorious building.

Nothing annoys me more than when an old beautiful building is torn down and replaced by a glass box.

When I was growing up in California, we had a theater downtown, the Alhambra, one of those great balconied movie palaces, and they torn it down and put up a Safeway grocery store.

The manager's office would give me the willies.

I don't know about casino there but it would be good because I will be there next vacation. It is good for me to play roulette here https://casinority.com/15-winning-roulette-strategies/ Hope it will help someone