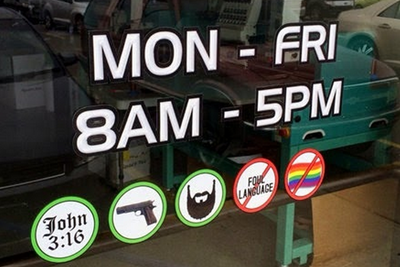 Well, except that they don't.

Of course, the gov says he'd never think about legalizing discrimination, but I'm not sure you can call it anything else.

I mean, I suppose that is well and good, if it is held to certain regulated standards across the board. But it isn't and it wouldn't be anyways.

At least be honest about it: they mean Christians.

And let's be honest about it: while the gays are the ones up in arms, in reality, others should be too. That bakery you want for your second wedding: are you saying you've been divorced???  Sorry, can't serve you.

You're wearing two different kinds of threads at the same time:  GET OUT!!!!!

But if we are still going with honesty - and we only kind of are - proprietors don't ask the questions of seemingly straight couples on their co-habitation, divorce, church-going behaviours. They just don't. They won't be discriminated against......but just for lack of a store owner being lazy........and wanting the revenue.

However, two same sex folks walking in......and all bets are off. Or people who look like Marcus Bachmann Lyle, the effeminate heterosexual are kind of screwed too.....and not in that good way.

I know that gays co-opt the likes of the civil rights fight of the 50s and 60s, but really, is it such a stretch for the governor to replace 'gay' with 'black' to think "yeahhhhhh.....maybe we shouldn't be doing this...."

In his mind, this is not discrimination. Until....................a Christian walks into a Jewish or Islamic owned business and is denied service based on 'religious freedom'.

As someone pointed out regarding Christian beliefs: "some people don't want part of your religion. that's called 'religious freedom', not a 'war on Christmas'".

No longer can folks in Indiana (or Fox News) have that argument. Well....Indiana and 19 other states. Of course they will still make those claims.

I say great to Salesforce for taking a stand, though it is unclear how much business they do in Indiana. I say great to Angie's List who says they won't expand by $40M in Indiana by 2020 as they had planned (though the cynical side of me says their business model showed failure on that part and this was an easy way of backing out of that). And great to all the cities who said there will be no official business travel to Indiana (though all have caveats of 'except for 'emergency situations' - though no one has explained what one of those might be).

Pats on the back to the conventions who claim to be abandoning their plans to host in the state and robbing Indiana of upwards of $100M due to this bill being passed and signed. I'm hoping they actually follow through.

I say boo the NCAA. Based in Indianapolis their statement claimed to be worried about having an inclusive environment, but their statement really lies here:  "Moving forward, we intend to closely examine the implications of this bill and how it might affect future events as well as our workforce."

While we should be happy with any support we get in this fight, I say to Ashton Kutcher......"who gives a fuck what you think.....you're Ashton Kutcher".

All of this behaviour adds to my overall unrest - political and otherwise. I can't tell if the world is becoming much more intolerant in a quicker period of time, or if my fuse is just at its end. Or both.

I guess it's a good thing I don't have a German pilot's license.

and where does it end? now the gov is trying to backpedal. nope; we know you h8, there's no givebacks.

I simply ask that if you are a business owner who chooses to discriminate against anyone, please post a sign in your window so I, and those like-minded folks who find discrimination in any form, even in the name of the Baby Jeebus, to be reprehensible, can take our business elsewhere.

That way, with no business coming in, those bigot business owners can sit in quiet all day and read their Bibles to try and figure out where it all went to Hell.

And THIS is exactly why I will not live in the US. My husband really wants to live there as he has this pollyanna view of the US (surprisingly as he's French), but I think this is really starting to open his eyes to the crazies that live there, and unfortunately what sort of hold their ideas and 'values' are gaining.

Friends and colleagues here in Europe are just shaking their heads that these sorts of discussions even take place. Of course, there are a different set of issues here, but certainly not about the basic values such as this (well....except for the muslim immigrants...and that's where I would be more than happy to sponsor your German pilot's license...).

When you guys come this way, you should just bring the kids and stay here!

No such thing as "too soon"

I am fascinated by the photo with all of its hateful signs. Is this the answer I wonder? If they post 'no gays' would this destroy their business in the end and this is the way to go?
or will it not really harm business? or dammit it is about laws .
I like the notion of stickers saying we serve anyone.

Hello??? "Religious freedom" is already guaranteed in the US Constitution. This extremely poorly worded law is nothing less than the ability to legally discriminate against anyone you want in the name of religion.