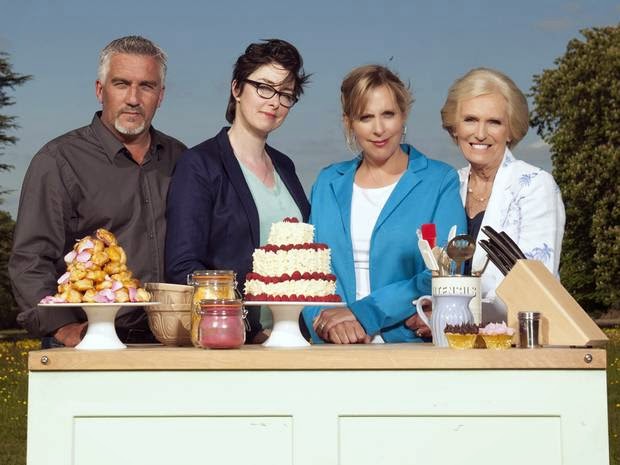 It is no secret that I find comfort in cooking shows. I like Ina. I love America's Test Kitchen / Cook's Country shows. I even like the new(er) PBS Martha show - though I was never a fan of the others she did when she'd glue gun stuff. I'm not into crafts.

I used to like Alton Brown, when he explained the science of food and cooking. Then he started being stupid with costumes and skits - and it got fucking annoying. Giada might have made good stuff, if you could look past her ever-exposed gums - and I never could look past that. How could one?

With the advent of the DVR, I'm sure I'm missing newer shows on FoodTV, but it's all I can do to avoid that channel with the 114 Guy Fieri (sp) shows that exist. And the ones he's not on, serial-adulterer Bobby Flay is competing (and always winning) against  some average housewife. What a paper thin ego that man must have.

But what turned me off the FoodTV was the competition shows. Not only are they not helpful, they're impractical and ridiculous. I get it is for entertainment and not actual learning something new in the kitchen. If you have to get out a sledgehammer to break a shell of something or have to fly to a third world country to get the special ingredient, chances are you're not actually making it for your family.

The baking shows are the worst. Over the top concoctions that no one can eat: literally. Most of their shit (yes, shit) is made from plywood, PVC and inedible frosting that is there for show. The winner gets a cash prize just for being able to finish on time and have it not collapse on the way to moving the 40' "dessert" to a showing table - and let's face it, half the folks are watching hoping to see one (or all) of them topple.

So it was with great pleasure that on PBS we came across the Great British Baking Show.

Yes, I'm late to the party.

Apparently, whatever we stumbled across was at least the third or fourth season of this. I'm not sure how we missed the others, but we did.

The two hosts / moderators are funny (and at least one has worked with French & Saunders, so....there's that). The judges are good - and fair. And the guy is named, I kid you not, Paul Hollywood.

He's quite handsome and has great hair and goatee and incredible eyes. Yes, I'm that shallow.

But the difference in this show is that:  the contestants actually bake.  ...and several times per weekend. And a series of breads, pastries and confections.

The other difference is, the bakes are judged not only on looks. The judges taste, feel, smell and count. Oh yes, if there are supposed to be 20 layers in a pastry, they count the layers. The contestants who had 16 or 17 were hoping it wouldn't get to that detail. They were wrong.

I believe they start with 12 participants and whittle it down to three. We came in when they were down to eight. 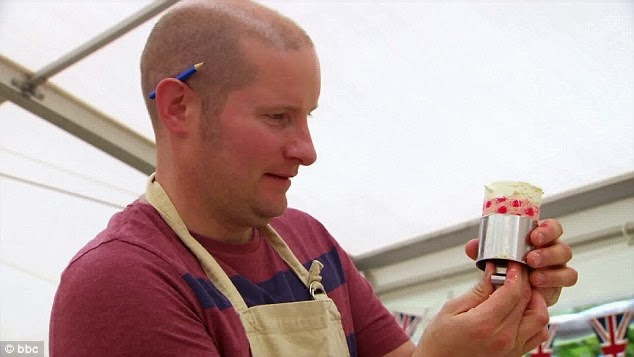 I had a few favourites that I liked their personality - like the above Richard (he seemed so affable, goofy and hardworking). I was hopeful for him or a woman named Chetna to take the prize.  (I won't spoil who won, in case folks haven't watched this, or want to.)

I found it funny to watch week after week - as they whittled down the contestants, I actually felt pangs of anxiety as they moved through their ever-increasingly harder tasks as time ticked away - or if they messed something up as they went along. I had to remind myself it was just editing and they didn't necessarily cut as close to the clock as maybe they made it out to seem.

Yes, some of the bakes were over the top, but at least they were all edible.

And they must do it for the love of baking, because as far as I can tell, unlike the $10,000 or $50,000 prizes that a stupid cupcake show in the U.S. gives out - the winner here got a commemorative plate and a bouquet of flowers for taking first prize.

I also detest competition shows. And the shows, like many in France, where the soundtrack overpowers the cooking. It's like MTV (when they played music videos) with food. I have not seen this one you mentioned; I don't think it's on here.

my friend john gray at disasterfilm.blogspot.com watches and loves this show all the time. but then again, he DOES live in the UK.

alton brown became one of those jeebus freaks, giada was too damn perky and child-centered, sandra lee is a drunk, and martha is too snobby. DON'T get me started on paula deen (bless her racist heart).

my MIL used to watch the food channel, but never cooked. I often wondered why she would waste her time doing that.

Just to add: Before I moved to France I was already fed up (pun intended) with the Food Network. It had become a collection advertisements for what to buy and where to eat. Pissed me off.

Yes he does have quite the eyes.

I love Martha, but, like you, when she isn't glue-gunning, but actually cooking.
Carlos and I stumbled onto that Brit show while waiting for Downton Abbey to start one Sunday and I was hooked.

I watched this entire season and I would LOVE to be a taster on the show. All the contestants were personable and easy to root for. They were chosen because they can bake, and not cast just for the "drama".

I was please with who took home the prize, but I was really rooting for Martha, she was just so darn CUTE!

Love the Great British Baking show! My first episode was several weeks ago on the 'bread' episode. Fun. Thrilling, even. And pleasantly down to earth.

I simply adored this show. And I enjoyed watching it because the people, save for the obnoxious hosts, were really pleasant. No ginned up drama, just people trying to do their best.

We were late to the game on this one, too. But it was such fun to watch. I enjoyed it far more than Top Chef.