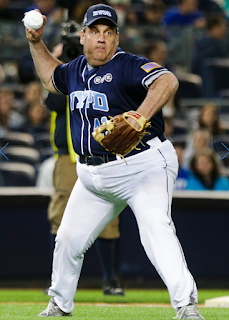 I was somewhat taken to task on Facebook for sharing a post of super-athlete, Chris Christie, concurrently showing both Moose Knuckle and Camel Toe.

My comment was that Christie had no access to a full length mirror and / or that he had a full staff of sycophants.

While not addressed specifically back to me, a 'friend' shared my post and asked why people 'fat shamed' other people.

I will go on record that this friend is probably 200lbs overweight. I'm not shaming - I'm just stating from where the person might be coming.

I wasn't really shaming Christie, though I'm sure it could be argued that I was. But there is no getting around the fact that the man and his BMI are out of sync.

However, I might have been shaming not in the fact that he is overweight but clearly dresses like he thinks he is not.

While at my nephew's graduation, 710 joked (I think!) that he was glad I wasn't a Sociology major - and if I were, that my thesis would have been "You're Wearing That?".

And two other friends of mine actually went to high school with Christie. At least one doesn't remember him - and neither of these guys were the ones pseudo-shaming me for shaming the governor.

If I were going to fat shame - and here it possibly comes - I'd have said something about his lap band surgery being unsuccessful. I mean, even Carnie Wilson lost weight the first two times she had that procedure.

I would have said, he did the (unsuccessful) lap band surgery for his probable 2016 presidential run, as fewer voters were going to pull the tab for someone who they'd think would have a massive coronary while in office. As it turns out, his less than stellar presidential polling numbers - and so far lack of announcement - would keep him out of the Oval Office more than his weight. 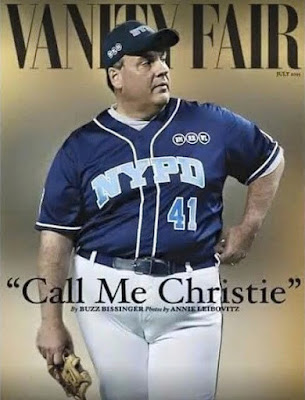 Apparently there is some meme regarding the Christie post of which I referenced. So a friend sent me this. Actually, this above meme entry made me change my entire post for today. I couldn't help grinning.

And since we are just going on a downward spiral and playing the on-going game of whatever the opposite of Non-Sequitur might be, I'm totally stealing this image from D@vid over at Facing Traffic. 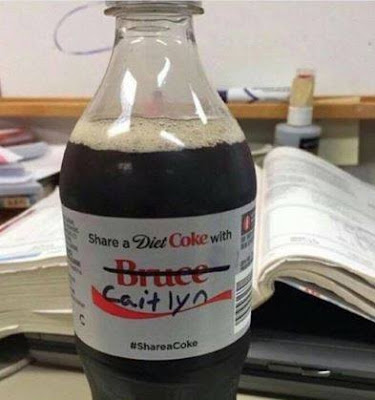 I shouldn't have laughed at either of the two above images (but 'yes' to the title image), but I did.

Oh Blobby, you set us up today. So many many potentially nasty comments to be made!

I'll just be nice and concur with those who say he looks more like Tweedledum than Tweedledee. Let's leave it at that.

oh my, you are on a roll today!

I am SO glad I'm not the only one with a twisted sense of humour!!! We were laughing so hard about these things this morning....thanks :)

There are so many things wrong with that outfit he is wearing. It's not a uniform but a photo op outfit and a bad one. I actually Love the diet coke bottle!

Is it really 'fat shaming' if someone is a public figure and wears something that is obviously unflattering as if it fits? I'm with you on this.