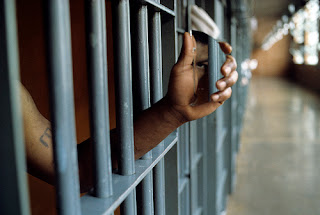 So I was chatting with my friend, Edward, who has liver cancer - the one whom I wrote about eight months ago.

Well, it's now liver, colon and stomach cancer. Things aren't going well, as you might have suspected from the addition of stomach.

Still the bigger surprise is when he texted me: "have I told you I'm in love?"

I wasn't even thinking that New York doesn't even really have the death penalty anymore. 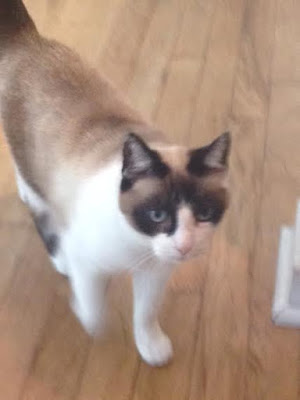 Oh yes, Scarlett (fka, Bootsie....or something) is now the one true love of his life.

I don't know how Edward came across a 12 year old cat, but she was ready to be put down and he couldn't let that happen.

She is beautiful, if I say so myself - though Edward would say it first.

The idea, in his mind, was to foster the cat until he could find it a home, which he thinks he has already done. There is just one little problem: he doesn't want to give her up. He has taken to her, as much as she has taken to him.

Not quite being an animal guy - or a relationship guy - Edward didn't know a thing about attachment. Nor did he know the whole rescue animals can really sense that they've been rescued and cozy up to their new owners.

He finds it "hysterical" the way Scarlett will place her paw on top of his arm. He went on to say, he's not sure he'd let a human do that.....ever.  And he wouldn't. And I'm sure he's anthropomorphizing the feline, but he thinks that the cat knows he's sick and is tending to him.

Perhaps - you hear of these kind of things.

And apparently Scarlett is all over him, or next to him. She doesn't like to be picked up (neither does Sophie, or did Tovah or Kylie), but loves pressing herself right next to him (ala Sophie, Tovah and Kylie) at all times.

It is funny to listen to him go on and on about her. I think, even with his limited time remaining, Scarlett is a great thing for him. He claims to have never cried over his diagnosis (and I believe him, as I know him, and when I was faced with that, I cried once, briefly - and I still can't figure out what triggered it), but he did shed tears thinking about Scarlett on kitty death row.

I hope he keeps her.

Edward is an extremely intelligent man, and impulsive, usually in good ways. He set his alarm the day of Apple Watch pre-orders and was on-line getting his order in, because he wanted one "before I die". He got his watch the first day they shipped.

He has "promised" me his Apple Watch when he goes - not that I'm really looking to collect on that one (assuming it happens!). But maybe if I have to come and collect watch, I'll take Scarlett home with me too.


Song by: Lucinda Williams
Posted by Blobby at 12:05 AM

awwwwww, what a pretty girl. I hope edward can live his remaining days with his kitty and a good hospice caregiver.

She's gorgeous, and, to steal a line from Pretty Woman because, why not:
It seems like he rescued Scarlett and then she rescued him right back.

You had better bring Scarlett home if that happens!

I would like to see Edward get some hemp oil and start dosing himself ASAP. It’s the treatment/cure the establishment doesn’t want us to know about.

She's a pretty kitteh. Hopefully Edward keeps her. Or she keeps him, rather.