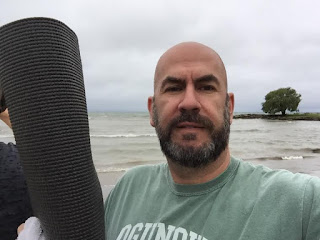 It was 53 degrees. Grey. Overcats (not a typo). Windy and threats of rain.

Last Saturday night, we probably got hit with 3" of rain in an hour. And then it just kept coming - all night long. Just like Lionel Richie.

It was wild. Our adjacent 3-lane, one way street was flooded and you saw people finding it was impassible and backing up....at full speed. Including ambulances who were trying to make it to the hospital.

One of our neighbors ended up with 10" of water in their basement. We were bone dry - luckily.

Still, yoga at the beach was still technically on for Sunday morning, so off to practice David & I went. 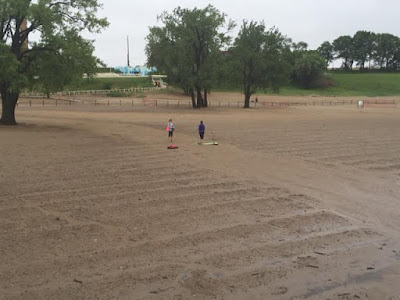 Don't let that huge crowd of two fool you. That lady on the left showed up after we did (the other person is the instructor). Once again, we were the first two people there....though 1,700 (!!!!) said they'd attend.

Mind you, it was a shitty morning. The wind off the lake was making whitecaps. People were out in their wet suits and surfing. Water temps were 55 degrees, but I've swam in that in Maine. Man-up, folks!!!!

I'm glad that I changed into a long sleeved shirt before heading out. I totally would have wuss'd out whilst hanging on the beach. It was a little cold.

The sand was pretty disgusting but I wasn't putting my mat down until I had to. As it turns out, we ended up moving to a covered shelter, as it started raining again. And as it turns out, about 50 folks eventually showed. 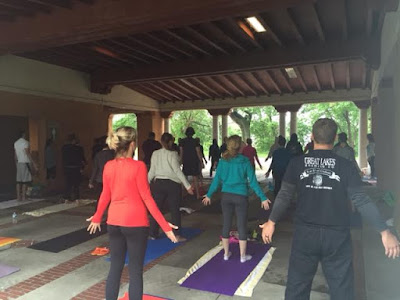 People on the FB page for the event were downright rude about 'weather {sic} the practice was still going to happen because of the weather'.  And because lack of an immediate reply, went on to say, 'I'm reporting this event to Facebook'.

So much for a zen-like crowd.

Even afterwards the practice others said somewhat accusatory, "well we looked for you, but couldn't find you! You weren't there!!!"

Well, whomever you were - the instructor started 15 minutes late, and stayed at the original meeting site until we started, so, that means YOU were later than 15 minutes after the practice was scheduled to begin.

I love that instructor ended up blocking all of those people afterwards. Talk about Negative Nancys.

But the practice was needed - at least by me. It was less than strenuous, but that's ok, I don't mind a simple flow now and again. And as I told David afterwards, almost no one incorporates Mountain Pose into their practice anymore - and I always find it so grounding.

Afterwards, instead of heading to tea, we ended up at Starbucks for hot chocolate - as neither of us drink coffee, and it we were cold to the core. The walk back to the car was into a direct headwind, that just seemed brutal.

Then it poured on and off the rest of the day.


Song by: Gillian Welch & David Rawlings
Posted by Blobby at 12:04 AM

It sounds like a couple of those FBers could'a used some yoga at the beach!

It's always a sunny day when we see your smile!

hot cocoa on a cloudy cold rainy day is a delight sorely missed here in AZ.