It's another Petey heavy week......but with good reason. 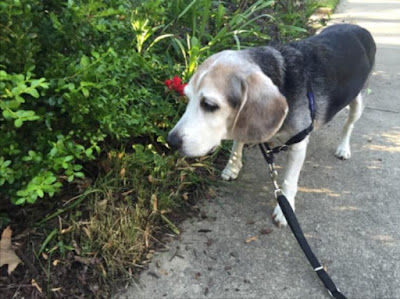 Just out on a daily walk while he surveys the terrain and smells. 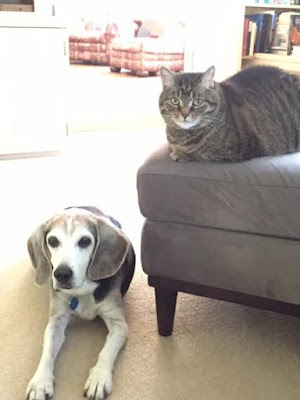 A lesser man would feel uneasy with this kind of scrutiny. 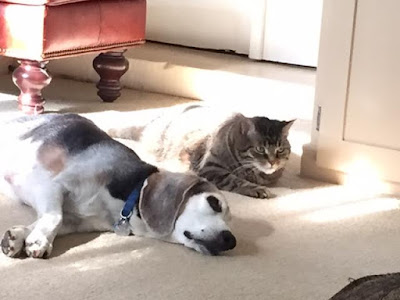 My heart melts seeing them together. 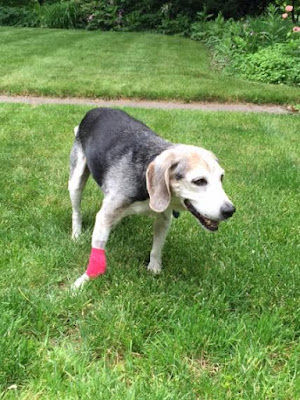 Petey with his girly bandage.

Wednesday night at 11p, everyone in the house was fine. I woke at 3a to Petey being somewhat ill - lethargic and labored breathing. I opted to wait it out until daylight before doing a vet call - as I didn't want to use the emergency vet. I also didn't wake 710, but by the time he did wake, we were afraid Petey was too sick to possibly make it through the day.

The first one we are familiar with, as he had it in 2012 and 2013 - but we've had a relatively quiet 18 months where his lungs are involved.

It was pneumonia, which is treatable. At least somewhat. He go IV antibiotics and fluids all day, then came home with us. I stayed up with him all Thursday night / Friday morning.  And he is better. His eyes are brighter, his cough less and his breathing no longer labored.

It's just scary to know he can go from fine to fatal in 4 hours. It's very distressing for all of us. I hate seeing anyone not being able to catch their breath.

But the vet staff did a great job and he's on the road to recovery, though I'd be happy if he at and drank a little more, but at least he is doing some of both. If you recall, the first time, he didn't eat for like eight days.

His pink-ish bandage is covering his IV port. They left it in, on the chance he might need additional IV fluids. He did not. 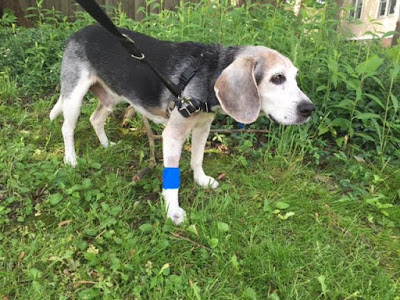 Yesterday, I got his port taken out, they checked him over and sent him home with me. With an appropriate boy bandage. He's sleeping a little more than he normally does, but that's ok - as long as he's breathing easily.

Pete is being a finicky eater - right now, hamburger only. And fed by hand. He won't even eat it from his bowl.

I see someone is going to milk this for all it is worth.

my heart goes out to ya, petey puppy; not being able to breathe is no fun (says the asthmatic girl). get better soon!

I'm sure your vet told you this, but you can help Petey's recovery by sitting with him a few times a day in a steamy bathroom - the oftener the better. While in there, cup your hands and gently pound on the sides of his chest; this helps loosen the secretions so he can cough them up. This is NOT a substitute for veterinary care, of course, but an adjunct treatment that some vets recommend. "Nebulization and coupage", in medical lingo. Carol in Philly (retired vet tech)

Carlos and I, and our Furry Kids, will be sending positive thoughts up to him.

You're a good dad.

There is no anxiety like a sick pet. How we want to assure them and make it all better.

Sorry to hear of Petey's health scare. I can only imagine how concerned you were. Glad it was something treatable and that he is doing better.