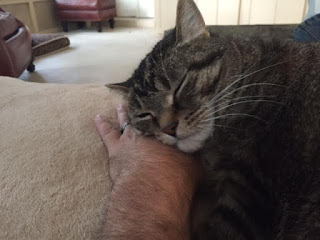 With the storms and flooding and all, I forgot Sophie's birthday.

Don't get me wrong, we figured out a few days ago, and made restitution. She got some treats and some extra rubs and kneading time.

And it's not like she knew when her birthday was.

She's been on a roll anyways. Her 'bathroom' is now (temporarily) in one of the guest rooms - which was actually where she started out her stay with us.

To acclimate her (and more to the point, Tovah) we gave her in her own bedroom along with her box. Or as I called it, her en suite bath. She was there for about three weeks until she climbed her way to freedom and found her way downstairs.

There was no going back.

A little under nine years later, she's still here - full of life (well, when she's not asleep). And each and every morning at 04:30, she starts pawing my nose. And then my face. Now she's taking to grooming my beard. Just to get me up early.

While I try to ignore it, I don't really deter her. I might only get 7-8 more years out of this - so she can do whatever she wants.

Sophie has always been more of a dog than cat, which is why I think she gets along so well with Petey.

She's a good egg. We love her to death.

Happy Belated to her.

A belated happy birthday to Sophie!