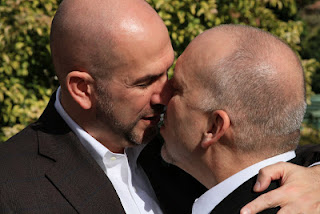 SCOTUS has done the right thing - barely - by legalizing same-sex marriage in all 50 states.

And while maybe not needed due to the first ruling, the Court also vote in favour on the other matter - that all states must recognize same-sex marriages performed in states where same-sex marriage is legal and licensed.

At 09:45, I logged on to SCOTUSblog and just waited with baited breath on the ruling. It came right at 10:00. I mean, immediately.

Odd. I didn't think I would be SO relieved, but I am. Happy, even. Sitting here smiling.

No one to sit and yell "YEAH!" too - besides the dog, and he's sleeping. So I turned to Facebook, and I think I was the first of my "friends" to post. I'm claiming that - no one can prove otherwise.

I even posted before texting 710 with the news.

His response?  "I hope this makes taxes easier next year".

"Oh. And I love you and am happy to be your lawfully wedded husband."

But followed up with all would be forgiven if we went out for pizza tonight.

Yes. My love can be bought. And yes. I'm cheap.

And yes, after 4.5+ years of being married, it is now legal in Ohio. Our marriage is valid.


So, to follow-up on my post yesterday, it was not 7-2, though I didn't think it would. It was the same 5-4 - and the same 5-4 voters as always. I mean, I know Kennedy would be the swing vote, but in terms of this I was pretty confident he'd vote this way.

The odd thing is, one Justice didn't write a dissent. All four dissenting judges wrote four different dissents. As of this posting, I have not read them. Nor do I know I will. Some of their crap will seep down to me, but I don't give a fuck what they have to say.

Of course, we will have to endure a week's worth of crap from the right wing media and the GOP presidential hopefuls.

Yesterday, fucking Ted Cruz, called SCOTUS, "unelected advocate judges".  Well, I don't know about you, but I'm not sure he's fit to be president not understanding the different branches of government.

And mind you, when SCOTUS ruled for Hobby Lobby, they weren't "unelected advocate judges". They never are when they vote the way of the GOP. He's such a fucking hypocrite. And Canadian!

But now we wait for pastors to set themselves on fire (please...do!). Now we wait for states who said they'll defy SCOTUS to do so (please do! I'm waiting to see how that all turns out for you.) Now we will have the GOP candidates saying how they'll overturn this decision. Knock yourselves out, but I think you'll be too busy overturning Obamacare.

For now, I will revel in this.

Of course, I think, weather permitting, a pop-in to Pride tomorrow is warranted. I'm not a fan of Cleveland's event, but why not show our support?

So, rejoice folks. Or at least the folks who read my blog. I don't expect to get hater comments here, but you never know. We will leave that to other venues.

I know many of my readers already live in states where same-sex marriage is legal or recognized. Still, I think we all share in this - a great victory. Not for gay men and women, but for mankind.

YES YES YES! I just heard on NPR! FABULOUS for all my boyfriends and girlfriends in the USA! dare I say we are now civilized?

let the glitter and rainbows and unicorns reign free!

It's a great day! All my best to you and 710 on this historical day!

Congrats on now being married in all 50 states

Curse you. You know how much I love that photo of you and 710