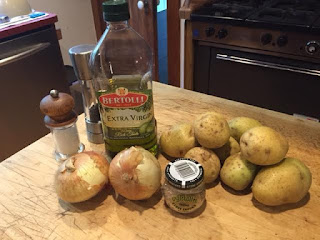 In my quest (well, one of many quests), to mix up our vegetable sides - per 710's inference - this time I went with potatoes.

I like potatoes well enough, I suppose, but over all, they don't do much for me. Somewhere, Morty just fainted, but he'll recover.....probably.

Oh, I'll eat them if put in front of me, but I don't go out of my way to make them, usually.

Yet, I was watching an old(er) Barefoot Contessa show the other day - all about side dishes - and everything she made, save one, was something I would just never touch. Alas, the last item, brought me to attention.

To quote the woman herself, "how bad can that be?"

Well, it probably could have been better, but I doubt it is any fault of Ina herself. I'm not sure it's my fault either. In certain ways I love our big ass industrial oven, but in other ways, well.........when it comes to no broiler or worse, regulating the temperature, sometimes it tries my patience.

Let's get going, shall we? 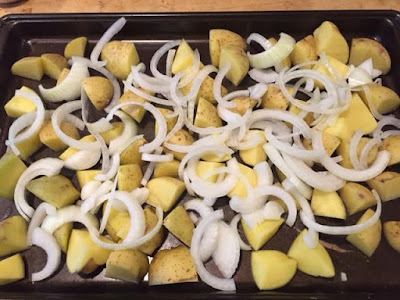 Cube the potatoes and cut the onions. Lay them evenly on the pan.

The onion part was my undoing. I did as Ina said, but I think they should have been thicker. You'll see why shortly. 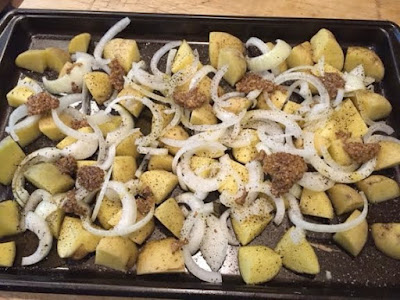 Drizzle with the olive oil. Apply salt and pepper and the mustard. 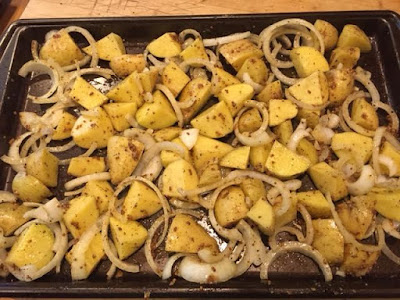 With clean hands, toss it all together, making sure that all parts have oil and mustard distributed evenly. 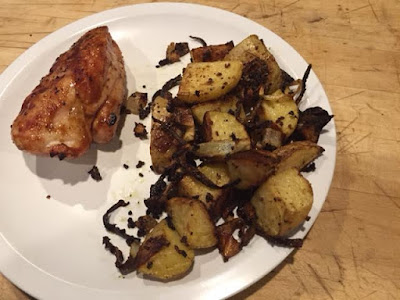 Like in what I am now calling "Petergate",  the one vegetable - the onions - cooked way too fast. I think a thicker sliced onion would have held up better. But I don't want to overlook the fact that somehow even while set on 425, the oven got to 500 in the first 15 minutes of roasting.

Yes, I turned it down more, but the damage was already done...or on the way.

In actuality, the now crispy onions were not really so bad. I just have to believe they'd have been better if roasted appropriately.

The mustard helps. Both 710 and I said our mouths were afire, but that could have been from the bbq sauce on the chicken. 710 asked if I used red pepper flakes on the potatoes. I had not (though not a bad idea).

What really helped?  Having them the next day. I thought the flavours were better after reheating them as leftovers.

I would totally do this again as a side. But I'd still do thicker onion slices.  ....and a lower temp.
Posted by Blobby at 12:08 AM

You could try seasoning the onions separately and adding them in when the potatoes are halfway done (or at whatever appropriate time). Adds a step, but it may work better than a lower temp.

I've made these before--I believe I saw that Ina Ep--and we loved them.
And what WCS said should work ... though there's that whole paying attention to timers and remembering stuff thing that is not my strong suit!

onions and potatoes make a delicious combination in my book.

I do this all the time, only I do not slice the Onions, I cut them in the same shape as the potatoes (cubed) and they come out great.