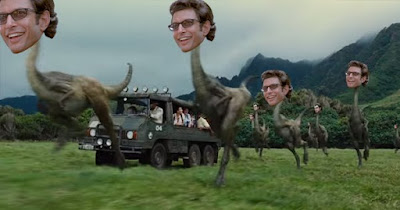 Ok folks, there is only so far I can go to suspend my disbelief.

In Jurassic World  (it's no longer just a park, but a frickin' world!) I can actually let it slide that genetically modified dinosaurs are created from blood in a mosquito trapped in amber for millions of years.

It's harder to swallow that considering what happened in installments 1, 2 and 3, that this place could get a license to operate and liability coverage from any insurance carrier. I don't care how good the waiver that you have guests sign might be. Those waivers have loopholes, people. Loopholes!

I cannot abide by the female lead wearing heels an off the rack Donna Karan (I'm guessing) dress as she tromps through the jungle. Even if she's an executive for the park, it's not really a corporate environment. Casual attire would be the norm.

On top of that, I cannot believe that Clint Howard's niece can - or should be allowed to - carry a movie with a $150MM budget.

Sure, I'll take dinosaurs jumping out of tanks ala Shamu at Sea World to eat dangling animals, splashing visitors in the first few rows, but the rest is malarkey.

You're probably wondering why we went. Well, it wasn't exactly my choice. Our friends, David & James, who we haven't seen in a while wanted to go. James is all about the big popcorn movies. Allegedly, the new Mad Max was "fan-fucking-tastic".  And these are not men who drop the f-bomb.

There are other movies I would rather be seeing, but......

Since we were going, I chose the theater and movie distribution system in which it would be shown. 3D - sure. DBox?  Didn't know of it. As it turns out, it's not like DBag.

For my readers who were not around during the 1974 release of Earthquake in Sensurround®, well, first, I hate you, but second, it is supposed to simulate what you feel compared to what is up on the screen. Now it's called DBox.

However, since you reserve on-line and there is zero way for them to check your status, I snagged four 'senior' seats at the low low price of $18.50. I really don't know how much non-3D, non-DBox tickets are.

It was fine. I wasn't expecting any more than fine and it lived up to all those expectations. Product placement abounds and there are holes big enough to drive a tractor trailer, or three, through, but I suppose a big budget spectacular is not really about the 'story'.

I don't think it is just me, that with a film like this, as they introduce characters, you started wagering in your head if they'll be killed......or when. It's no huge spoiler alert, but when you see the inept slovenly security guard - you already know he's a goner.

I think I was at a 90+% success rate on who I figured would bite it.

I love Chris Pratt.....well, Andy Dwyer. By his own admission, he has three looks in the movie. I counted two.

Opie's daughter was fair - but anyone could have played her. The running in 4" heels for the entire movie was implausible. Her nephews were subpar at best. They didn't play moody, unimpressed teens very well - they didn't play any one emotion very well.

Vincent D'Onofrio (g-d love him!), chews his scenes fairly well. And the guy from New Girl was good.

As for another implausible piece I couldn't overlook - not one park visitor used a smart phone to video or take pics of any of their adventures at seeing a prehistoric beast right in front of them. Even the main kid character used a camera where he had to advance the film (!!!!!)

They can clone dinosaurs, but using a medium that went out of fashion almost a decade ago is ok?

Like with most adventure movies, they try to inject a few humourous moments to relieve the tension. I would say there were about a half-dozen, maybe 10, here. I think I smiled twice and laughed once.

And of course, there are the cheeeeeeeesy lines and scenes. Expected, and yet still unwelcome.

The DBox was an ok addition - especially after the D-Rex came into play, but it is nothing you needed to spend extra for. I thought the 3D was very well done.

Like James said: it's a summer popcorn movie. You're not supposed to think too hard on these and they are not there to be considered great movies. I mean, it's going to make a ton of money - though after seeing the credits and the amount of folks - if they got paid even minimum wage, it had to cost more than $150MM.

One of the last lines of the movie?  "Where do we go from here?"

Maybe they cloned the cameras too.

It sounds like the first three, or is it four, films, just remade.

As for the DBox, I'd have bought the person behind me a coke and told him to kick my seat every so often to create that same feeling.

I suppose it is the sort of movie one has to suspend a lot of logic and scientific questioning to allow some enjoyment.

I haven't seen it yet. I'm waiting for the crowds to decrease. I don't do packed theatres very well... But it would be awesome if a T-Rex came through and chomped a few patrons for me.