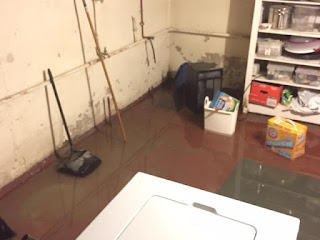 I hate being a grown-up. I mean, it just sucks. Save for legalized drinking, what does it got going for it?  Nothing, I tellz ya.

So yesterday, a worker was scheduled to come do some stuff that required basement access. Being the nice guy I am, I figured I would make sure the cat box was clean - and then sent 710 to do it. I am happy to do many a-thing around here, but I leave the litter box to him.

710 should have known something was wrong before he went down, as Sophie was at the top of the stairs, not wanting to go down to her box and yelling at him.

He came back with the news of having water in our basement.

These are things non-adults don't have to deal with.

On and off for weeks we've had rain - but torrential rain. Neighbors have had 4-10" of water in their basements these last few weeks. We've been bone dry. In the 10 years we've lived here, we've never seen a drop in the basement.

We went quickly into recovery mode. 710 called off work, we were at Home Depot at 08:00 to rent a pump, and before that I left several messages with clean-up companies....but clearly we sprang into action, not waiting for them to return the call.

As it turns out, we are on several waiting lists for clean-up companies. The rains have flooded everyone, it seems. Antiquated sewer systems could not handle the 2" per hour of rain we were getting, so lots of folks have water - or worse - in their houses.

Thank g-d for 710. I mean, I tried to help as much as I could, but he knew about the pumps (oh, plural, as our neighbor lent us one of his), how to hook them up and such. 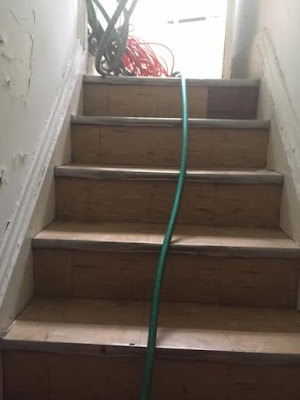 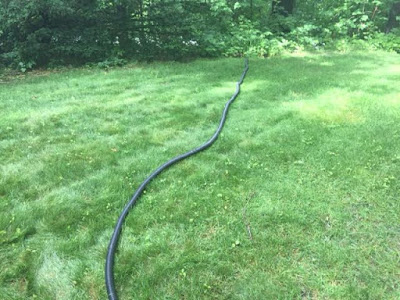 I would say within four hours, we had the majority of water pumped out of the basement. The floors are still damp and the drains are still in question - but all of those things will be looked at.

While 710 placed fans for drying stuff out, I called insurance agents (covered!.....thank you!), Cleveland Sewer and got our first estimate for finishing pumping the water, sterilizing the floors and walls and drying.

I think they might paint the floor too, which would be faboo - as I think it would look better whenever the time to sell arrives.

Ruckiry (not Jon's boss), we didn't seem to have any raw sewage issues you hear so much about. Oh, to be safe, we have utilized neighborhood vendor facilities if one had "the urge". But I think we're ok to use our own - which is good, because sometimes you don't have a lot of warning.

And ruckiry (again, not Jon's boss), we had little of value down in the basement that was directly on the floors. Boxes for small appliances, dishes, etc, that we kept for whenever we do move (not that there are any plans).  So out a lot of stuff went to the curb. 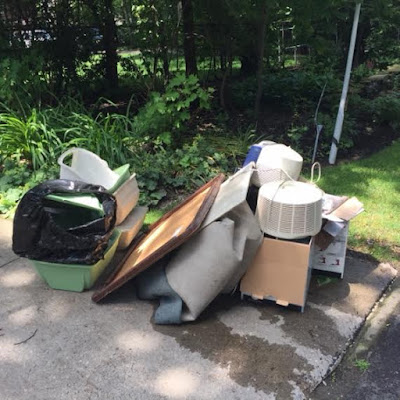 It is just our luck that trash day was the next morning (today!), so I dragged all this shit to the street.

Today, a plumber comes to check the sewer line. If it is a problem with the city, we get that money reimbursed!  If not, we'll eat that cost, I suppose - though maybe that can go towards our deductible too.

But in the next few days, someone will come to wash the floor, sterilize it, and dry it.....then paint it.

In the meantime, Sophie has to readjust to a different place to use her box.

If I were still a child, I'd be told not to go in the basement and that would have been the end of it all. Oh - those were happy times.

that sux. been there, done that. at least you got rid of some crap in the basement!

Icky, I have never owned a home with a basement, I love my condo, this kind of issue falls on the staff. Now there was the morning that water was dripping out of the ceiling light fixture in my bathroom - icky - but again the staff got to clean that up.

Oh Blanche, did you know we have rats in the cellar?

There are times when I think having a basement would be nice/
This isn't one of those times.

Yikes! What a pain in the ass. Sorry, bud.

Just think: y'all could have had an indoor swimming pool! That would have greatly increased the property value!