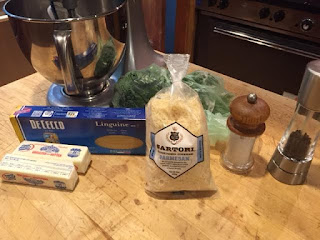 You know me, always on the hunt for something to make.

Something easy to make.

I don't mind complicated, but sometimes you just want easy. And something new. Not that Fettuccine Alfredo is "new", but the real deal can be such an ordeal.

Ruckiry (not Jon's boss) for me, on Sunday evening (though I was a little tipsy), I flipped through Martha Stewart's PBS cooking show. Sometimes I watch, sometimes I keep on flipping. But "3 Ingredient Fettuccine Alfredo" made me stop in my tracks.

I made it the following day.

But to be gayer than Martha's general demographic (which is pretty fucking gay, I'm thinking), I upped it FOUR ingredients (six if you count salt and pepper, which Ms. Stewart clearly does not).


then salt and pepper (and I used parsley too) 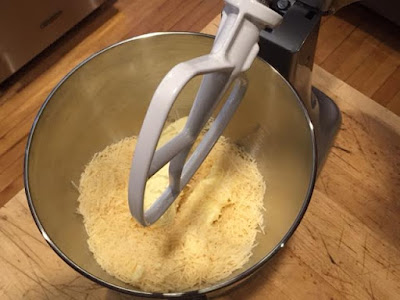 Mix butter and cheese together until they are creamy. 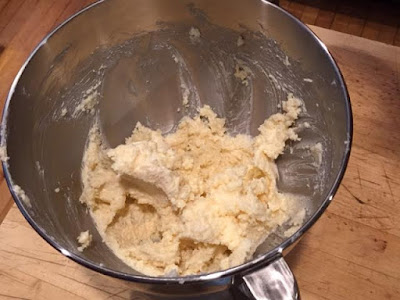 Here's what it looks like afterwards. Leave it in mixing bowl. 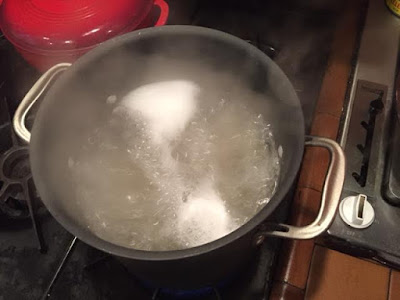 Boil pasta according to directions. Reserve one cup of hot pasta water. 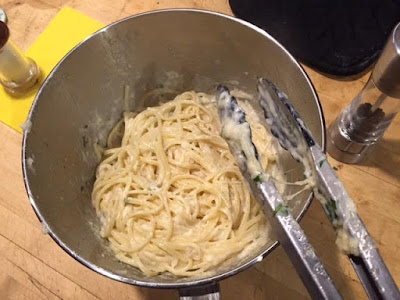 Drain pasta, add it to the mixing bowl.

Toss together until butter / cheese mixture melts and incorporates into / onto the pasta. Add some of reserved pasta water if it needs to be loosened up (I needed about 1/4 of a cup).

Season with salt and pepper, as needed. 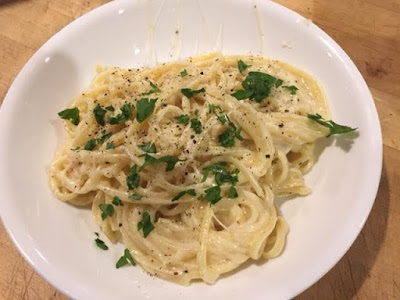 
The flavours were good - but not great. But maybe this dish isn't really about an abundance of flavour. I rounded it out with salad and bread.

No need for eggs or anything - so that's a huge plus. And it's not a jar, so a big plus. But it's heavy. Martha says to garnish with more grated cheese, but trust me, it didn't need it, so we didn't add it.

I liked it, but I'm not sure I'd rotate it through that often.

First - this probably feeds six. Cut it back if you need. I'll be eating this for lunch for the next few days.

Second - while there aren't a ton of dishes to clean, that mixing bowl is like glue. The melted cheese / butter mixture just congeals. I'm trying not to think what it did to my intestines. Even rinsing and soaking immediately didn't help at clean up time as much as one might have thought.

It was a good experiment and probably really good for a casual dinner with 5 other friends. But I won't be revisiting that often.


Song by: Jefferson Airplane
Posted by Blobby at 12:01 AM

too heavy for my aging tummy. I'd rawther (a nod to spo) have marinara sauce on my pasta.

This looks wonderful. If I could I'd eat pasta every day, so delightful.