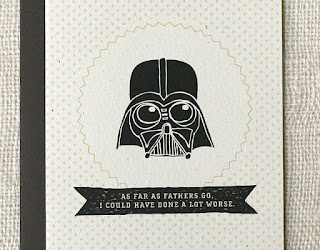 While I haven't really been counting them down, this is almost the last of the firsts.

Today is the first Father's Day without mine.

I'll go on record that I still think of Bob daily, even if it is just for a fleeting moment. But Father's Day wasn't his thing.

If he cared about the day at all, he kept it a good secret. It's not to say he wasn't appreciative of the things we tried to do for him, but I think he'd have been happy with a nod - no presents, no fuss, no attention.

I'm exactly that way with birthdays.

Still, I know these milestones are important to my mother, and I'm ok with that. I have noticed her bring him up more in conversation:  the day he went to the hospital. the day he went to rehab. the day he came home from there. We are dangerously close to his readmission and anniversary of his death. I think it will be hard for her.

My friend Glenn just lost his father in the last month or so. He's a little sensitive to getting ads about "it's not too late to order your Father's Day gift".  He at least found some humour in it when I asked if B&N told him their shipping details - and that maybe it wasn't too late.  Maybe they have drones that go to heaven.

Maybe it is in the timing, but ads like that don't really bother me at all. Of course, maybe that is because of my father's laissez faire attitude for the day.

Right now, the plan is to have dinner with my mother. But that is about it.

On another note: Summer Solstice begins at 12:38 EDT.  Happy Summer.

It's the first Summer Solstice since my father died.  :-)

Blobby, you have fur kids...
Happy Father's Day and may your Solstice rock.

The first year 'without' is the hardest, yes.