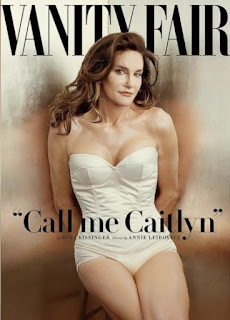 I was going to go with "Dude Looks Like a Lady", but figured no one would see the humour in it at all.

I'm trying to be more sensitive to the T in LGBT. It's not that I don't care - but I really don't have any trans friends. And by that I mean: I don't have any. Nor do I know anyone who is trans.

I don't even known anyone who has a Trans-Am.

710 has a co-worker who transitioned earlier this year.

This is big huge news, as his industry is about 96% male dominated.

HR gathered all the managers in his division to discuss that a certain person (who was named) would be transitioning from male to female. I believe all employees were mandated to go through a sensitivity class. And a restroom was being constructed for multi-person use. She would be using it, but so would other women if they chose to.

I was really stoked by management and their, at the very least, public-facing support.

710, is possibly the only gay man in his building. He's totally bringing down the the 10% of the population being gay thing - at least in his workplace. So for him, seeing this kind of "situation" has been extremely positive.

The person who transitioned deals with 710 on the phone, but they rarely see each other, so 710 was never sure where in the transition process she was. But 710 made a very conscious decision to not end calls with "thanks guys" or use "guys" in general.

I've heard of women who get bent out of shape with the general term, but I would venture to guess that the term isn't used as masculine or feminine for this use - but in meaning a group of people. It's not meant to demean, but 710 didn't want to take chances.

He says that he was never a very good looking man, but seems to be more attractive as a female. I'm guessing besides any surgery, you have to figure how you carry yourself would be very different - not physically either, but emotionally and mentally. That burden of not being who you are might be lifted and outweigh any worries of what people are thinking.

As for Caitlyn - good for her too.

I think I'm more excited that she will make her first public appearance to receive an ESPY for the Arthur Ashe Award for Courage.

I will say, I was surprised by the timeline from the Diane Sawyer interview until the announcement and almost immediate turn around that she would be on the cover of Vanity Fair. It seemed short - though I know she was taking hormones for ages. But in my defense, I don't know how long gender reassignment takes, nor do I know how long in advance of airing was that interview taped.

I know there will be snickers along the way (see my original blog post title) from people. But save Chaz Bono, there aren't many public figures putting it out there to help the folks who do this, or are in need of this, on a much more frequent basis than we can ever know.

I wish she were going to do something other than her E! reality show. Those clan of tramps with which she lived and was on TV with will sully the entire thing.

Of course, that's just my opinion.  But it's my blog.

Hopefully those Katastrophe bitches won't ruin everything.  ....but deep down you know they will.

Song by: Mandy Barnett
Posted by Blobby at 12:03 AM

I'm thankful she didn't spell her name with a K like the rest of the clan.

It really is an amazing picture. I do hope that she can live a private and happy life.

Ok with that photo I had to google who Caitlyn was. That photo looks nothing like the previous photos that I've seen of Jenner, and I have to admit I hadn't really paid attention to what name she had chose. Thanks to you and Vanity Fair, I now know. All the photos we've seen come through our mailbox on People magazine I ignored, they looked like Bruce with lipstick. Had this photo been used, I would have stopped and found out who Caitlyn was.

The words "reality series" have tuned into such a negative thing--thanks in large part to Kardastrophes and Honey Boo Boos and Duggar--but I think Caitlyn's show will, hopefully, be more in a documentary mode, a la "Becoming Chaz," and will shed some light n an issue far too few people. myself included, fully understand.

OK have you been deleting my comments? Because I REALLY want you to hear my comment, which is that when I first saw the picture, I thought, Wow, Idina Menzel has really been working out!

So I wonder how Caitlyn is going to feel about her 25% reduction in pay.

That's great that 710 was so sensitive and considerate toward his transitioning colleague. Good for him! I hope that Jenner will be able to build a happy, normal life although I'm not sure that's possible given his connection to that media whore family of his.