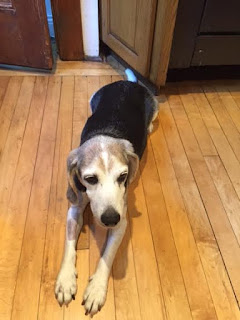 Still, I thought I'd give you an update on the old man.

As the post title suggests, we are getting there......but slowly. Two steps forward, one step back.

Being an elder statesmen, he's not quick to recover. And being this is his third bout with pneumonia with us (and twice with m sister?), his lungs can be pretty fragile.

Pete is showing signs of recovery, now that we are a week into this. He's been sleeping a lot more than usual (which was a lot anyways). His cough persists, but not as often or as deep as it was earlier.

He has somewhat of an appetite, but not nearly as voracious as before - which is hampering getting his strength back. He's still eating freshly cooked hamburger (!), but I've been trying to wean him off it, by pressing it into wet food. Had I just put it on top, he'd just eat the burger and leave the wet food. If I put it on bottom, he noses the wet food out of the way.

The best signs of recovery are two-fold. He's been following me around the house more often, as opposed to just staying in the bed / on the sofa. And he's been underfoot while I make dinner - very interested in what I'm doing, though not quite (silently) begging for food.

Oh, and he pooped. Twice.  Not twice in one day, but still.......the four + days he went without going started to worry me more than a little.

Tuesday night, was the first since last week when I slept in our bed, as opposed to sleeping on the couch so I could be a few feet away from him. In an odd way, I felt bad for sleeping upstairs, but he was fine and I needed a decent night sleep.

I don't know that Petey will ever bounce back to where he was before this round of pneumonia. At the ripe old age of 13, that just might not be possible.

Right now he's slow - we haven't been able to do many walks, let alone medium or long ones. And when we do they take a lifetime. He is still a little weak, but I think he's getting stronger, even just a little bit, on a daily basis.

We're only a week in from this happening. I suspect another few weeks before we know for sure. And one more week of antibiotics.

Thanks for the good thoughts. We are doing the best for him.

hang in there, petey. but be careful; don't go out in the midday sun!

We all love Petey.

Sending Petey good thoughts for a continued recovery. It takes longer the older they get.