Don't Let Me Down Again 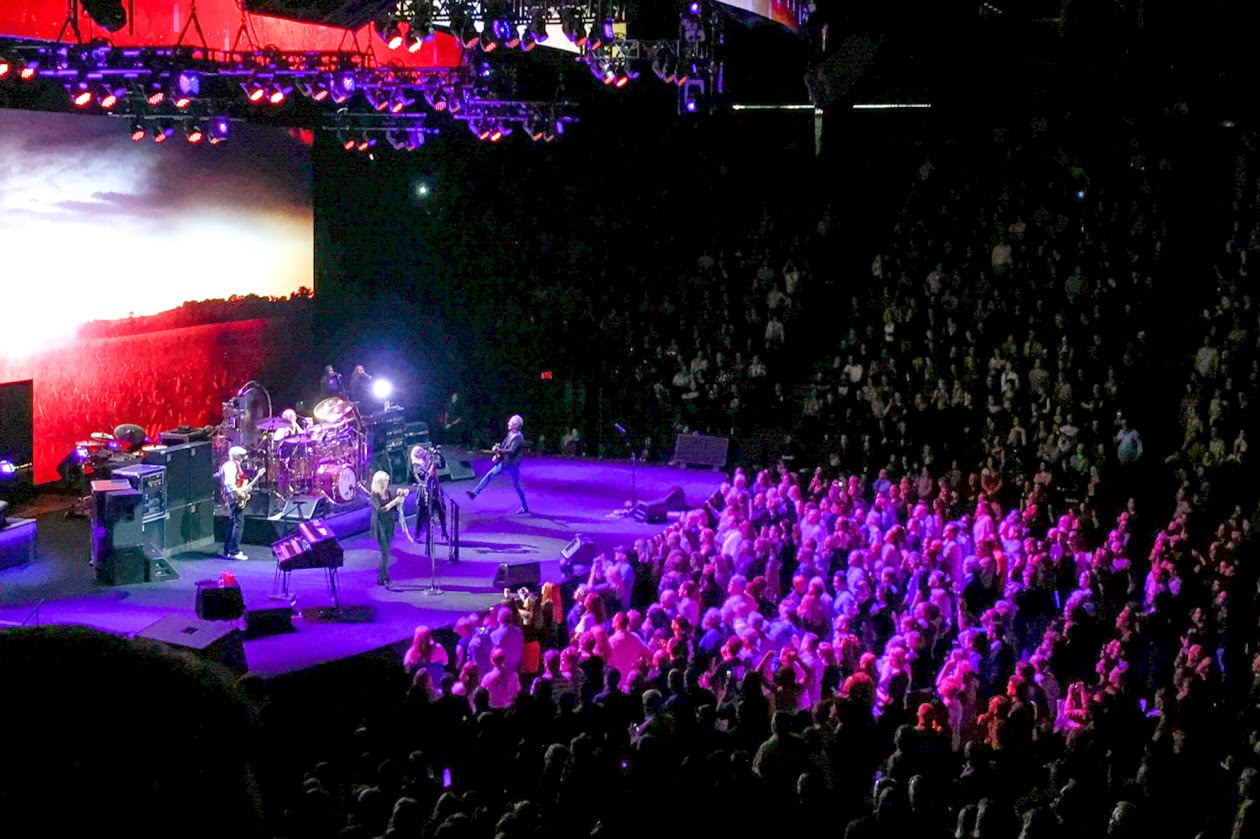 You know, some days I just write to write. This might be one of them.

I'm not too too ashamed to say I was a fan of Fleetwood Mac.

Their Rumours tour was what I consider my first official concert. I chose the show, I paid for the tickets. I got a contact high way up on the rafters.

Five and one-half years ago, I wrote that in the past, I had seen Fleetwood Mac perform live eight times. Four of those times were great. One was awful. One was pretty decent. Two were fair, at best.....and I'm speaking of the last two times, after Christine McVie had left the band.

Even in that last concert in which I saw the full five members (1997), which was only pretty decent, I anticipated never seeing them again. That show, was so.....calculated, it was a little depressing.

Maybe the others back in the '70s were too and I was too young to notice....or care. But I think they had more than a hint of spontaneity. Of course back then, all the members were raving drug addicts, so....you could add that to the mix.

I successfully avoided their tour last year. I had no interest. Their Ep that they put out was horrific and I decided to try to retain memories when they weren't all Medicare D eligible.

Still, with Christine McVie coming back to the group after 16 years (their first show of this tour opened two nights ago) I had a pang of 'should I?' when they announced another tour this year. But I held back - and for a few reasons.

The band members range from age 66 to 71. While Lindsey Buckingham's guitar work and vocals are seemingly intact from earlier days, Stevie Nicks was not so lucky. Oh her fan base thinks she's still the tits, but she has a range of three note. No. I'm not kidding.

Oddly enough, in the right setting (which is super rare), Buckingham can arrange her recorded music to still sound good. Live performances are a different story.

I can't sit through that again. Let alone pay out the nose for it.

Fleetwood Mac has the highest average ticket price of the 2014 touring year - at a whopping $388 per ticket.

So yes, you can get some tickets for $75 (plus handling fee, plus venue fee). So you know how high the ticket prices have to go to make that $388 average.

I've seen enough shows in the nose-bleed section to know that $75 isn't worth that kind of effort. I also know I'm not paying $500+ for a decent ticket. Full band or not.

And it is a full band. Plus.

Back in the day (oh yes, I'm using that phrase again), it was just the five of them that could deliver a stellar show. But now they have an additional guitarist, percussionist and three backing vocalists (to hit the notes that the three main singers no longer can).  During Christine McVie's absence, they also had a keyboardist. So, for all I know they'll retain that person for additional support. If so, the ancillary musicians will outnumber the actual band.

And true to Fleetwood Mac style, they're hitting the road with no new music to promote, nor will the play any new songs they allegedly have in the works. So it's the same old show they've been performing since 2009 (or 1998, actually) though the 2003 tour had some new music, which they've since discarded playing at all.

Even Buckingham said at the time of the tour announcement that 90% of the setlist is already settled. I can almost hear the running order in my head. Most of that has been in place since the Tusk tour.....in 1979!!!!!

(Actually, I found their first concert set-list, which they will never deviate from in the run of the shows....and it has maybe one song they've never done live in this iteration.)

I'll give them this though - the entire tour is mostly sold out. While I briefly waffled on going, since they're not playing in Cleveland, what tickets that are available in other cities are either behind the stage (as if!) or pushing the four-digit price point (as if !!!!).

Chances are I'll have better seats watching the semi-crappy fan-made concert videos on YouTube which will no doubt, confirm all the reasons I opted not to go to the show.

Song by: Buckingham Nicks
Posted by Blobby at 12:01 AM

And in another 20 years, Motley Crue will be wheeling themselves out on stage in wheelchairs to perform...

The show must go on!