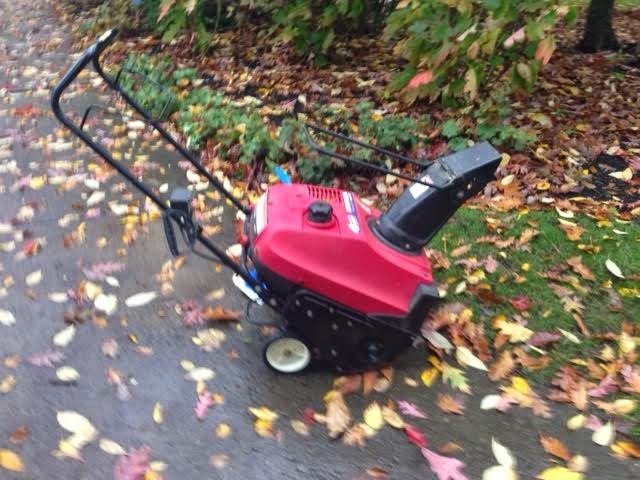 Blew. As in past tense of blow.

At the end of last Winter, our 12 year old snow blower died an ugly ugly death.

No one is quite sure what happened. It's just that both all the gas and oil lines leaked out everywhere into and onto the garage floor.

While repair was possible, it was also expensive and it's been serviced before, but never did come back as strong as when it was a young buck. It clogged easier. It didn't throw snow as far. But it always started.

It always started mainly because we were smart enough to get a key start ignition. Who the fuck wants to fool around with trying to pull start a device when it's subzero temps? Not me.

We got this at our last house a day before a 15" snow fall. 710 endeared himself to our neighbors when he just went over unannounced and cleared their drive as well. Tom, the male half of that household, never was too kind to us prior to that, but he came around after that. His wife, Annie, was always friendly.

With our current house, a snow blower is a necessity. The drive, as you might have read in any number of earlier posts, is at least 80' long. There is no way I could - or would - shovel that thing. And the drive is set up just oddly enough that there is no good way for a snow plow to maneuver in and out - let alone a place to pile up the snow - at least with out killing lots of landscaping.

He's the one for the job on researching the best model, reliability, etc. But normally, I'm the one to use it. I got to see it up close and in person before we made the purchase.

Lord knows there are models with cup holders (not kidding) and flood lights. And while I have cleared the driveway after sunset (or before sun up) I've never had trouble seeing or the need for headlights.

The new one will have a better way to turn the snow chute. The intake it bigger. It cuts a bigger swath.

But today, the old when gets taken to the curb. Maybe some scavenger will pick it up before the trash guys get there. They can sell it for scrap somewhere, I suppose. It's not like any thing will leak into their vehicle.....as it already spilled out months ago.

That is one object I can gleefully say I have never had to use, and have no plans to. Snow is something I avoid at all costs. Enjoy the new one!

I love the snow, but I am glad to never have lived in a place that needed me to, ahem, blow it.

I've never had one of these devices; I've always used a shovel. I am one of those odd-balls who enjoys shoveling snow.

Yet another advantage to living at the beach: no need for a snow blower. ;-)