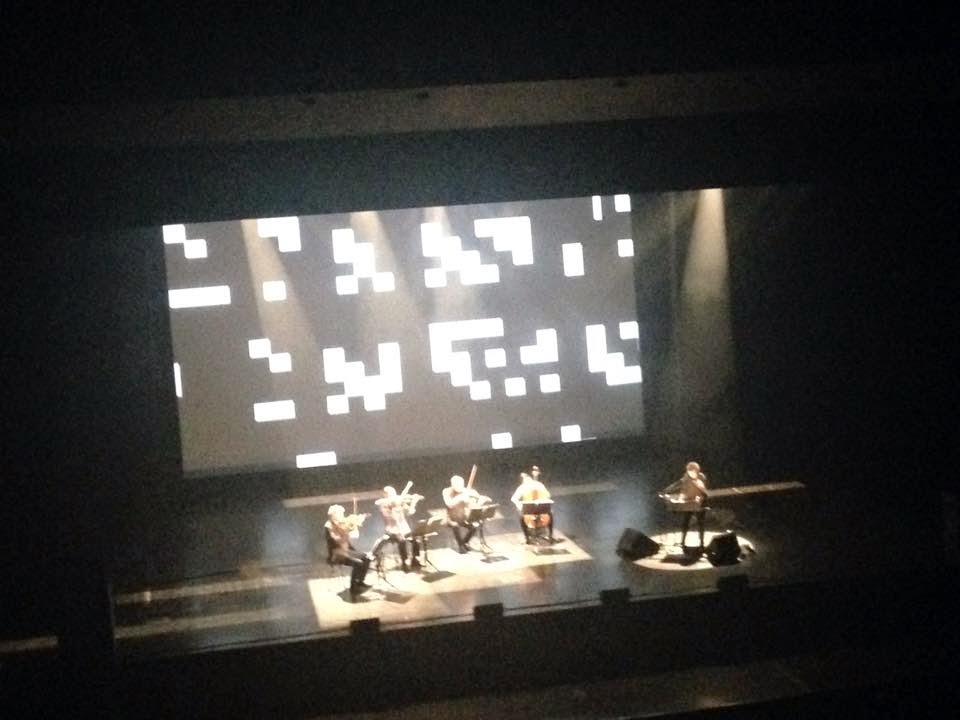 One of the reasons 710 and I traveled to Columbus this past weekend was to go see Landfall, the new piece of work by Laurie Anderson and the Kronos Quartet.

I'll admit to have heard of the Kronos Quartet for the last few decades, but never actually heard ( knowingly) anything they've ever performed.

While I was overall impressed with the piece, it was not the best Anderson show we had ever seen (10 or 11 and counting). Of course, I might have gone in with different expectations of Anderson's storytelling and the amount there might be.

The majority of the evening was music with some sporadic stories and a number of visual components that would tie back into the stories that had been told.

The overall theme was that of Hurricane Sandy, which hit the east coast almost two years ago. While Anderson's opening story said it happened October 12th, I know this not to be true, just because of the way the storm actually hit into Ohio at my cousin's funeral and subsequent missed flights out to California due to associated weather almost two weeks later than Anderson stated. Yes, I'm quibbling.

I say "overall theme" because there was a recurring dream portion and a great smaller piece on the stars that seemingly had nothing to do with a storm hitting land.

But Anderson tied in the storm with extinction, which I thought was very well done. There was a non-sequitur piece or two as well. Or perhaps I'm not sophisticated enough to understand how singing Korean songs in a Dutch karaoke bar fits into a hurricane storyline.

Kronos' music was, at times, very good. As you might expect, they can be considered avant garde and with the subject matter, at times their playing came across as frenetic. I suppose that is the nature of notes deciphering a hurricane.

Anderson, an accomplished violinist herself, did her normal few bars - tops - of playing on her electronic violin and stuck mostly with keyboards and voice. Her usual voice distortion contraption was present as well, and it might have been the mix, but I had to concentrate very hard as to watch she was saying. The speaking seemed muddied.

I think the folks who went with us to the event found it interesting, but I don't know they'd qualify it as good. I thought it was good, but not great.

Music by: Laurie Anderson & the Kronos Quartet
Posted by Blobby at 12:02 AM

Oh I would love the hear the Kronos!

Love Kronos and Laurie Anderson, and saw both (together and separately) as often as I could when I lived in London.