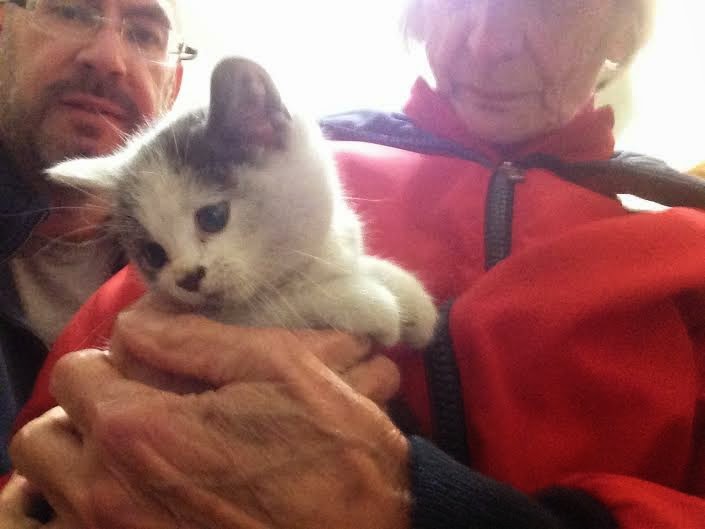 Wednesday night we heard a cat meowing outside.

I went out and looked but could not find one.

The voice was so full, both 710 and I assumed it was a full grown cat. And of course, being the softie that I am wanted to make sure it was warm and had food, but was discouraged by exhibiting this behaviour as to not have a cat hang around.

Fine!  (though I pouted a little - and worried a lot.)

Thursday morning, I had almost forgotten about him/her when I heard the wail. Kitty in distress.

Petey was all leashed up and ready to go out - chomping at the bit, if you will - but I left him inside and went out to investigate. 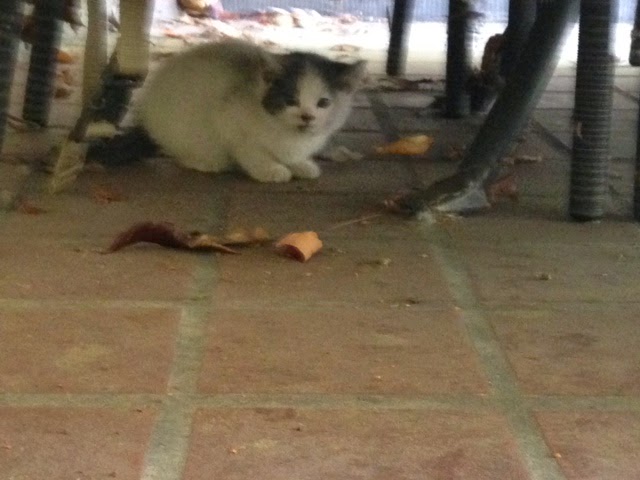 It wasn't a cat at all, but a kitten that could be no more than three months old.

I felt horrible about leaving it out all night when it dropped to 40 degrees. So I run inside and get it some milk and a bowl of food. It wouldn't really come out from under the table, so I went to take Pete on his walk, knowing that the guy had been there all night, surely he'd remain for another half hour.

Upon return, I found the food bowl completely empty. Now I felt very bad - he had been cold and starving. So I trotted in for a little more food. 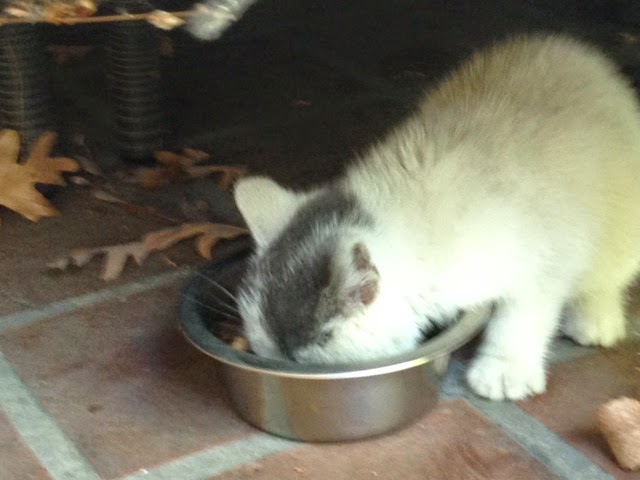 Right back to the dish it went. And I went to the basement to find Sophie's cat carrier.

Well, first I sent a neighborhood email to ask if anyone had lost a cat - but I knew they had not. I would have gotten a notice to send out and no way a little kitten just wandered so far onto our property. But while I did that email thing, I was contemplating what to do with a kitten I was now calling 'Gus'.

Oh yes, I was quick to name "him", which of course equals attachment issues.

But my plan was to go to Rescue Village, where we got Sophie - and because they are a no-kill shelter. However, in the back of my mind, I knew I had to pass my mother's house to get there. So I grabbed a litter pan and scoop and off I went.

As I drove, that 'attachment' issue would get the best of me. I started to feel guilty about putting a kitty in a shelter.

I stopped at my mom's first. She was out doing yard work, and surprised to see me in the middle of the day. She was more surprised when I pulled out the cat carrier.

She was excited, actually. Her first words: "I don't have a littler box", to which I replied, "I do".

I made it clear, she didn't have to keep him, but she had first dibs but I was really headed to Rescue Village.

She took to "him" right away.

While I would have let the cat come out of the carrier on its own, my mother reached in and cuddled with the cat and vice versa.

Though he didn't purr, he was very comfortable with my mom and nuzzled with her. We set up the laundry room as the induction center. I ran to the store to buy food and a few toys and some additional litter. My mom used that time for bonding.

We left the kitten alone while we had lunch, but the kitten mewed a lot. At this point, the cat had been wide awake for at least four hours and no signs of tiring - though I know when it crashes, it will crash hard.

Before I left, the kitten was in my mom's lap, seemingly as content as could be. The new times I went near it, he hissed at me. But that's to be expected. I had to stalk and trap it, but he was good in the car with me.

I don't doubt, my mother will disregard the intake area and have him out in the family room that first evening. I do know that "Gus" is now a purring machine for her - so that's great.

She must be excited because she called at least two of my sister with "the news".

We really do need to find the gender so my mother can name it appropriately. So far the grandkids all have their ideas for names.

I don't know if I believe in an afterlife or fate. In my father's eulogy, I talked about his love of animals, which he passed on to me. He made it clear he didn't want to leave my mother alone, before he passed and then here I am with a kitten with no home.

Even if all of it is coincidence, it makes for a great story.

Song by: Emmylou Harris, Dolly Parton & Linda Ronstadt
Posted by Blobby at 12:06 AM

SO CUTE! And such a nice thing to do. Now you need to get a fresh "tootsie roll" in a baggie and get the little angel to the vet. Please keep us posted on "Gus".

how exciting for your mom! it was meant to be. and maybe your dad DID have something to do with gus!

So glad you rescued the kitten and now he'll be rescuing your mom.

Congrats to your mom and Gus. Kudos to you for the rescue. My latest rescue, Nina, sends her love.

So, so cute!! Sounds like a perfect pairing! Please do keep us posted on your mom and "Gus". :-)

Ahhh....no matter what anyone else says...or what i've written about you before...or any evil thoughts i've had...you're definitely a good guy. Most definitely. Well, you did something nice. And that should count for something.

You're a good man with a big heart, Blobby.

what a lovely story, indeed.