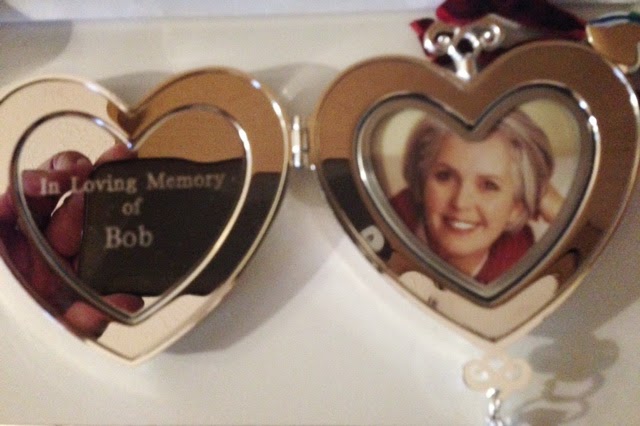 In my eulogy to my father a month or so ago, I spoke of being a Jr. ....even though technically I am not. Our middle names are different.

I also touched on not being a Mr. Blobby. That would have been my dad. At least until he passed. I ended the talk with saying, I was happy to become Mr. Blobby now.

So, it was odd for me - and possibly others - this last Sunday. We had what might have been our first family Sunday dinner since he passed in August. Some of us had been out there in different forms, but not (most) all of my sisters....and their kids, or at least the ones who aren't at college.

While I didn't make everyone come for dinner, I highly suggested it. The day would have been my parent's 58th anniversary.

I thought it important to all be there and bring in dinner so my mother did not have to cook, even if we never mentioned why we were there. You can't actually celebrate the anniversary, I suppose, just subtly acknowledge it. But I think this first year will be land mines for mother on milestone days. I'm sure they are for many widows and widowers.

Fortunately, or un, most of these milestones come in the first four months of his death: his and her birthdays, December holidays, Thanksgiving and their anniversary. I'm trying to push my sisters into not changing any traditions for the first year.

But Sunday, as I set the table, I started to put a place setting down at my father's chair. It was odd, to say the least.

The odd thing was, should someone sit there, or would it be more obvious if it remained unoccupied at the head of the table.

I set the his place and decided I would sit there.

Let me tell you - it was a whole new perspective.....in many ways.

Only one of my sisters said something, and not in a bad way. The seat, which was still next to 710, easily looked down at everyone on both sides of the table. In certain ways, it made me feel to be head of the family, which I was literally - but not figuratively, which I am not.

My mother still gets that title.

Maybe it is some male gene, a feeling that a man needs to head the table. I don't really think it's that, but it all felt odd. ...and I asked no one's permission.

On a lighter note, the extra large locket in the title image. I found it lying on a counter at my mother's house. The woman in the picture is not my mother.

I showed it to 710 and one of my brothers-in-law and had a chuckle on if that were my dad's "other wife". Of course, I couldn't just let it go, so I showed it to my mom and asked her the same question. At least she laughed.   ...and laughed.

Apparently, the wife of a man she worked for had it engraved and sent to her. The woman is just a "model", like the happy couples in picture frames you buy at Blood Bath & Beyond.

I have no idea what my mother would do with something like this. Sure, it was a very sweet gesture, but it weighs probably one-tenth of my mother's total body weight. And it would mean finding a picture of my father that would even fit into that and cutting it out.

But at least my mother laughed, and that was the important take away.

very nice gesture, blobby. and it sounds like your mother is in a good place. a special way to end yom kippur.

I like this story; I like that you all laughed. Sometimes it takes a while for the laughter to return.

I remember the first wedding anniversary my parents would have celebrated had my mother lived--it would have been 52. I sent my father a single yellow rose, because Mom was from Texas. No card; just the rose.

He was so happy that I remembered. And that's the important thing.

I like that you sat in your father's chair. I think it would have been very sad if the chair remained empty during this 1st family meal after his passing. Its important to find little ways to move on.