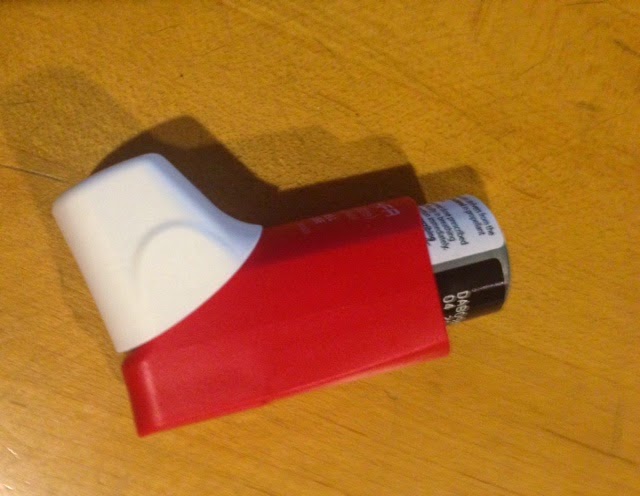 Well, this hasn't happened to me in forever.

Back in 1987, when I first started actually living with 710 (you know, when both our names were on the lease - not just spending nights at each other's place), I had this horrible bout of coughing. It lasted days....then weeks. And with each passing day it got more intense and more painful.

It was totally non-productive, but became painful from just the hacking. And the constant coughing almost became a trigger for needing to vomit. It was unpleasant, to say the least.

My doctor at the time (Jon, it was Debbie Taylor - remember her?), put me on a succession of cough medications, each stronger than the last. Each worse tasting than the last. Until finally, there was nothing else to give me, since none of those touched my cough.

Off to a pulmonologist I went. I did my PFTs and they diagnosed me with something called "seasonal asthma".

I'd never heard of it before - or since - but apparently it's a thing.

I would say for 2-3 years I experienced some recurring issues from it, but then, boom, it just went away. But while going through it, I was put on Entax LA (which the FDA finally pulled from the market) and an inhaler.

But I have not used any medications since. Or few, if any. As I grew up, my allergies seemed to dissipate and my "asthma" seemed to go away.

Until the end of last week.

Oh, how I knew that cough. Even decades later. I tried (or hoped) to think it was just something else, but a trip to the doctor yesterday confirmed I was experiencing my old symptoms.

Of course, I missed my joke opportunity to tell them I just got off a plane from Liberia or the Congo. But the joke would have been on me, after they quarantined me and shut down the medical facility. No doubt I would have to pay damages for work lost time and numerous law suits - and I don't think the money in my HSA would cover that.

So, I'm back on inhaler....and an antibiotic. The latter for 5 days. The former, for who knows how long. I have some crud in my lungs they want to get rid of and I had a low grade fever. Let's hope I'm getting my annual illness out of the way early and I don't repeat a worse scenario in January / February.

and if ya don't watch it, you could develop pneumonia. speaking of which, have you had a pneumonia shot? they are good for 10 years. I got one in march when I wound up in the hospital for just such a diagnosis.

I have the same thing! For me, it's also exercise induced. I hate taking the inhaler since it makes me more jittery than 5 cups of Turkish coffee...but it does wonders for the cough.

Incessant coughing is the worst! Hope it passes quickly.

I have the same inhaler; I feel your pain.