October's app is just one of those somewhat frivolous apps - almost a throw away.

TonePad doesn't really do anything.

If you go search on the Apple site, it says the app does not exist. However, I just downloaded it via my phone. So I just don't know.

Some blurbs will say that using a virtual piano app is ok for a full iPad but not for an iPhone. I can see that, you would only see 5-6 keys out of the 88. Even on an iPad, I doubt you'd get a full keyboard.

But for those who want to "play with creating music" on the iPhone, TonePad will allow you to sequence notes and patterns of notes, which will play sequentially from how you put them in and repeat as necessary.....or ad nauseum......however one might see it.

The tones are not like actually playing a keyboard....it's more to help you process a tune of which you are thinking. The actual tones are something you're more likely to hear in a demo from Moby.

Low on the screen are - ta da - the lower notes....the higher ones are at the top of your screen.

I made two songs and saved them both. 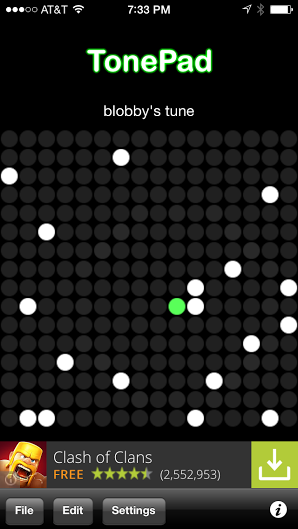 Allegedly one can upload the 'song' you create to a website, but each time I attempt this, it says to check for an internet connection, which I clearly have.  So you miss out on my composing skills. Your loss.

The non-pro version - naturally - is free. That's what I have.

TonePad is a time-waster, but it's something to do to try to make a listenable tune. Mine are somewhat hypnotic. But I bet they all are when they loop over and over.
Posted by Blobby at 12:03 AM

it sounds a pleasant way to pass an hour or two.