You Can't Count on Me 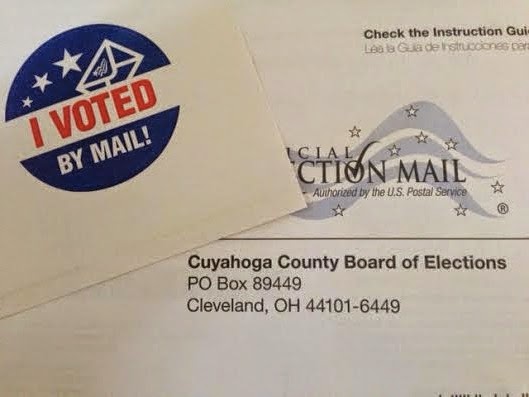 It's that time - the time when you mark your ballot to make your vote count.

Or hopefully count. Since 2000's hijacking of the Presidential election, I'm somewhat skeptical that my vote is ever truly tallied. The 2004 election, where dozens of boxes of uncounted absentee ballots were found on a loading dock here in Cuyahoga Country, after the fact,  left me suspicious we'd ever get it right.

Still, I fulfilled my civic duty by filling out my absentee ballot.

Oh yes, I don't go to the polls. At least anymore. Since 2006, when we went to electronic balloting and they could not produce a receipt to show me my confirmation of what I just put in, I opted not to trust that technology. Maybe they've worked out the kinks......but I'm not betting on it.

Of course, with the recent SCOTUS decision to uphold restricted voting laws, there is less and less to be positive about. Jim Crow is alive and well and SCOTUS-approved!

Here in Ohio, the Republican Secretary of State, made sure that early voting was decreased both in number of days and hours of those days......making it harder for people to vote.

At the actual polls, one must have a form or photo ID or a current utility bill with their name and current address on that. Which of course, presents problems when the utility is in one person's name and they don't drive. Of course, there area other documents you can provide, but it all seems problematic.

Oddly, voting by mail pretty much avoids all of those restrictions. Yes, you have to put either the last four of your SSN or your driver's license number, but that's it.

As for it being cost prohibitive, you pay postage ($0.47?) to register for mail voting and then $0.70 to mail in the ballot if it is two pages. That's cheaper than taking the bus to and from the polling place and you don't have to hassle with those voter restriction laws.

But, like in everything Ohio does, we as Democrats, are fucked.

There is no way John Kasich won't win a second term as governor. The Dem candidate, while idealistic and on paper was good, he fucked up time and time again with little stupid shit and just kept making a big pile of shit. He's a non-contender. There aren't even ads running for him.....that's how much he and the DNC know he was dead in the water.

Because of that, the lame Governor candidate helped drag down all the Dems for the top 5 spots, including Treasurer and Attorney General.

The joke is, the Secretary of State didn't even need to enact the voter ID laws to keep the lower income and minority populations from voting Democrat - the republicans have little chance of losing.

Of course, the SoS enacted those for the 2016 election. He's thinking ahead to make sure Ohio doesn't go Blue again. And the Governor is thinking ahead as well, as he will no doubt be making a bid for the White House.

Voting used to be a thing of pride, where one wanted to do it. Now it's just to stave off the super-creeps who get into politics. Sure, most were always creepy, but it seems to be up to a new level and the stakes are too high.

My ballot is in the mail. The one take-away (I hope) is there is now a tracking number on my ballot that I can track via a website. Is it full-proof? Probably not, but it's something.

Song by: Counting Crows
Posted by Blobby at 12:03 AM

49 cents for first class mail. it's a crapshoot here too - the rethuglican guv incumbent is inching closer in the polls to the dem challenger. and the dem NEEDS to win.

yeah, I too have been dismayed ever since 2000. there are sinister forces at work behind the scenes (koch brothers, karl rove, darklord cheney, et al).

I still vote the old fashioned way ... I pay someone to do it for me.
Kidding.

My ballot is filled out and going to post office today. I got to vote for the incumbent democrat congressman that Carl Demaio is trying to unseat. Yes I'm in that district. Demaio is that gay republican that is often posted on JMG. My mother always said if you can't say something good about a gay republican who leans tea party ... just vote for the democrat.

how frustrating this all is.