Shot at the Night 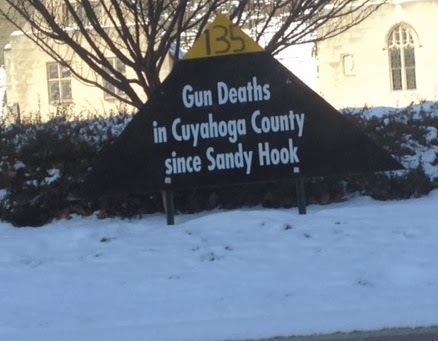 I find it hard to believe that another school shooting a year since Sandy Hook is just a coincidence.

....yet here we are. Predictable as ever.

At this point, you almost think all law enforcement would be on high alert when these anniversaries come around. Of course, the sad fact is, as many of these incidents that happen, every day in a high-alert anniversary.

It's just a fucked-up scenario.

I know it is wrong to treat one differently than the other, as all the victims are just that.......victims. But I reflect on Sandy Hook time and time again. It's not that I have ties to the area or know even remote family members - I just keep coming back to that they were kids. Little kids.

Save for closing down the school at Sandy Hook and planning to raze it, I'm not sure anything has come of the tragedy last year. No new or change in any gun law. No real changes to access for mental health services.

Politicians choose to have no power over the NRA. The key word there is "choose". Sure they have the ability to tame them, but at what cost to their re-election campaigns.

Case-in-point: two Ohio legislators (shockingly Republican!!!!) are proposing elimination licenses to carry concealed weapons. Of course to get that current license, one must get mental competency clearance, criminal background checks and firearms or peach offer training. To eliminate the license altogether, would mean eliminating all those requirements.

Their logic is that no other amendment needs licensing, training, etc for freedom of speech or to worship. I love how they don't say assembly, because many times you do need a license for that, depending on the venue.

I love being from Ohio.

The same federal and state politicians make it impossible for those in need to get, let alone afford, mental health services. Sadly, they are cries for help that end in murder, their own suicide or suicide by cop (after killing others, of course). The politicos are / were continually blocking of the ACA is just more maneuvering that keeps those unstable folks without assistance.

My title image was taken in an area close to me. I don't know the last time it was updated, but it's been reading '135' for at least four weeks. I think we had 5-6 shooting deaths in the last week alone. Even the opponents have seemingly given up tracking this shit.

The only thing worse than these senseless killings is that there is no change and nothing gets better.

Now that there's a new school shooting, we'll have to hear an entire media round on  how Obama is trying to take away everyone's guns. We'll have to hear about how these assholes need assault rifles for hunting and protection. How it is a g-d given right to buy 8,000 rounds of ammo - you know, "just in case".

Yes, once more I will write my U.S senators. Well one. One is on-board with gun control, one is all for all weapons all the time. His canned responses back to me are painful to read. But if one doesn't go on record for what they are for or against, they don't know their constituent base.

Not that they really care. I honestly don't think they care what their constituents want - they vote their "conscious".

...or whatever NRA lobbyist pays them the most.

Ugh...my first thought was that the sign maker was one of the new deaths and couldn't update the sign but I'm sure that would have made it news worthy.

I'm shocked at how little coverage or BREAKING NEWS treatment that shooting and the Sandy anniversary received around here - too busy talking about 3 inches of snow.

I hate that these idiot politicians think more guns is the answer. I'm lucky that so far California isn't having any of that. But if the law ever changes where I live, fine. I'll not only start packing, but I'll take lessons and practice so I only need one bullet to do what needs to be done to protect myself.

Same thing in Texas, maybe a bit worse. I believe that guns DO kill people... and the idiots that are holding the guns do too! I have always said: "I would rather meet and UN-ARMED angry/lunatic, then an ARMED one". I think the issue is about how accepting our society is about violence. Violence in video games and movies make it all seem like a game.