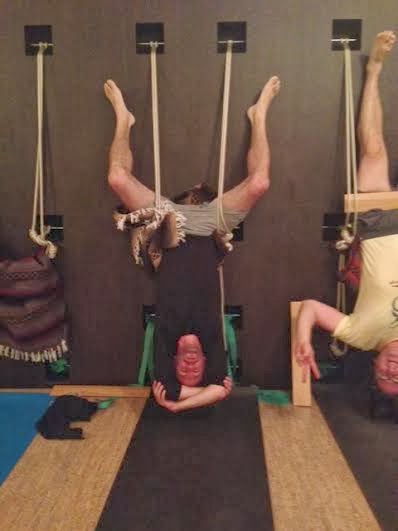 Honestly, it looks dirty, doesn't it?

The way my legs are positioned are not helping a case for discussing exercise, but this is the way they were supposed to be, even though you see David's legs straight-up. But I can explain. Honest.

Yesterday, we plunked down $15 for a full week's worth of yoga classes at Evolution Yoga. They get hyperlinked because in the two classes I've taken there, I've gotten more out of those classes than possibly the four years I've been practicing. They deserve the shout-out.

Anyhoo, for 15 bucks, we can take as many classes as we want during this upcoming week - and they even have a class on xmas, for those non-Jesus loving folks. (psssst -you know, the same ones who patronize Chinese restaurants on 12/25). Even if we took this one class, that's pretty cheap - since the Jungle yoga is $25 per class.

Oh yes, what you see above is called "Jungle yoga".   Oh-eee-oh-eee-oh.

But you have to say / sing that last line like Morris Day.

Let's start off by there were more men than women in this class. A first for both David and myself. Our "oms" had more tenor, bass and baritone sounds than ever before. It was a beautiful thing. I'm not hatin' on women, but sometimes yoga classes are estrogen filled.

While technically not a hot yoga class, the flow had me dripping. In a good way. I hesitated going into Child's pose so not to put my sopping forehead on the mat. It makes it all slippery for the rest of the class. The thermostat said 77, and hot yoga is 85 or 90 (Bikram is 105), but I could have used a towel yesterday.

Eventually we moved to the wall to use the ropes. Allegedly, the classes are usually smaller and the majority of time is spent on the ropes, but this "huge" class of eight (?) we only spent maybe a one-third of the time using them. It was quite enlightening.

Even barely using the rope for Warrior III was a great help for when we did it without. Now I've done Warrior III dozens of times, always struggling with balance, but our intro with the ropes made it so much easier when we went without. Ditto with like a Revolving Warrior III (though the image linked should have the back leg risen and extended).

However, what you see in the title image is just upside down yogis.

They're not quite head or hand stands. You just - and I swear I'm not making this up - make a sling out of ropes and a blanket and hang from it.

The reason David looks different than myself is, he put his wooden plank (not a euphemism) at his abs. When you do that, you straighten your legs and bring them inside the ropes. I had not put my positioned the plank as of yet, so one's legs are to be outside the ropes and more in a frog position. Yes, like I said, it looks dirtier than it is.

Personally, I don't know how guys who are into bondage do it. It is so much work. Where is the pay-off?

Still, David and I agreed it was a great class, and we are planning on hitting that studio most days next week together. I don't see me getting to my gym for lifting, but we'll see. I mean, 710 and I still have three movies to see before year's end.  Tick Tick Tick.

I managed to do this once upon a time in a yoga class; I don't recall what it was supposed to do for me; but I had a marvelous sense of accomplishment for being on my head for once in my life.