A few weeks ago it was Robert Redford and last Friday (hey, I had regularly scheduled posts slated) it was Judi Dench in Philomena.

Without major spoilers, it is about a woman in search for the son that was taken away from her after giving birth out of wedlock at a convent 50 years prior.

Dench, as always, is great and no doubt a shoe-in for an Oscar nomination.

I've been a fan of hers since her small rolls in Room with a View and 84 Charing Cross Road. And 710 and I were happy to stay in on Saturdays to watch her in the BBC's (PBS here) series As Time Goes By. She was the only truly great thing about Shakespeare in Love and she did a good job as M in the Bond films. She might be in iffy projects, but she is never bad.

The story is good (if you can make it through the first 30 heart-wrenching minutes) and not extremely predictable.

The film has garnered good buzz, unless you're New York Post or Washington Times, who believes the movie is nothing but a hate-fest for the Catholic church and the Reagan administration / republicans. And while they take their lumps, they are not undeserved and the title character lets them both off the hook.

The movie ran the gamut of emotions - where you laughed, felt extremely angry and I'm not ashamed to say that both 710 and I teared-up.....and not just at the sight of Mare Winningham still being allowed to act.

While the movies was playing at our local art house, we saw the film at the mega-plex. The seats are way more comfortable, though we should support the independents more often.

Here was the scene going in: 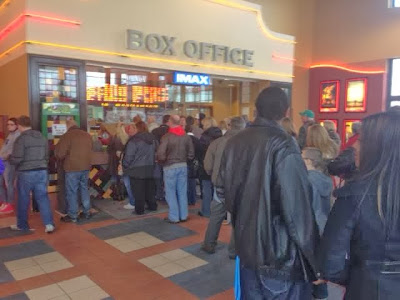 I posted the pic on Facebook and joked that Philomena was going to be a huge box office success. The reality was - everyone was there to see the Hunger Games,which was playing on 6 of the 20 screens. Or maybe they were there to see Black Nativity, which oddly enough is not a Tyler Perry movie.

Of course, the joke was kind of on us. Yes, we saw a Judi Dench film at the 15:10 show, and assumed it would be empty. We barely got two seats together, it was so packed. I think 3-4 other folks were younger than us (no surprise). Granted it was in the smaller theater, but still........

The movie is one I wanted to see, so we got that out of the way. Four more to go, which might be a tough one to do by year's end, but the previews were decent enough to think about two or three we'd like to view.

Pleased that we agree about Dench's performance in 'Philomena', though I think almost as much credit for the film itself is due to the screenwriters and, in particular, to Steve Coogan in his dual-role as actor/writer.

Hadn't really thought that the Catholic Church would have had much clout left in the entertainment field these days, but from what you say it's still too early to deny its pervasive negative influence - after all, its had many centuries to 'hone its skills'.

Did you she her in Reds and Reds 2? 1 was not a bad film. I haven't seen 2 yet but I'm sure it's better than most of the other sh*t out there.

You should see her onstage Blobby: she come on and just dominates the theatre (in a nice way)