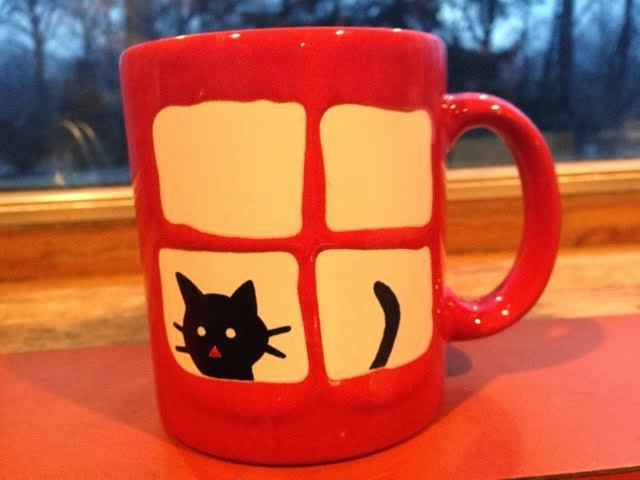 I hope everyone has a great holiday today, assuming you celebrate this day.

However, even if you do not, chances are it's a day of relaxation when one can kick back and watch 24 hours of Ralphie trying to get a BB gun.  ...oh and eat and / or drink.

For us, it is getting up late (well, as late as the animals will allow - which really means an extra 20 minutes). Lazily reading the paper and making a proper breakfast.

It's not that Cap'n Crunch isn't proper (ibid Stevie B), but some sort of eggs, bacon and English muffin will probably prevail. And coffee for 710.

710 is required to drink out of this cup on Christmas morning.

I gave him a similar mug umpteen thousand years ago for Christmas, right after we got Tovah. We've had discussions on if the cat is looking in a window, or out. For some reason I used to think he was looking in, but it is most likely out.

Oh yes, I say a similar mug because this is mug #2. After we moved to Cleveland, I broke mug #1. I felt horrible. Ruckiry (not Jon's boss), there is a cat store in town that had the same mug. Score!

Where in our olden days, 710 probably used this more often, but now he gravitates towards mugs that hold a greater quantity of coffee.

Tough for today - it's tradition now. We have such few, he's sticking to this whether he likes it or not. He can make multiple trips to the kitchen for more joe if he is in dire need of caffeine. I'll even fetch it for him, since I'm such a good guy.

Oh - and we might do a movie later in the day. I always say that and we rarely do, but I do want to see that new Meryl Streep movie, even if Julia Roberts will probably attempt to suck the life out of her own role.

quiet thoughts of the day to all at your house. my cawfee (philly pronunciation) is just about ready. 24F at 5:45a, cats are fed.

I vote looking out - I see the cat as being trapped in the cup and hoping and praying that someone with come and rescue him before he is drowned in scalding hot coffee.

Sorry, but it's gonna be a rough day and yesterday I had to run from the mall because of a shooting! (turned out there wasn't but don't tell that to the 5 helicopters and 100 police cars).

I've made it through 2 rounds of Ralphie so far.

I hope you had a good wednesday.