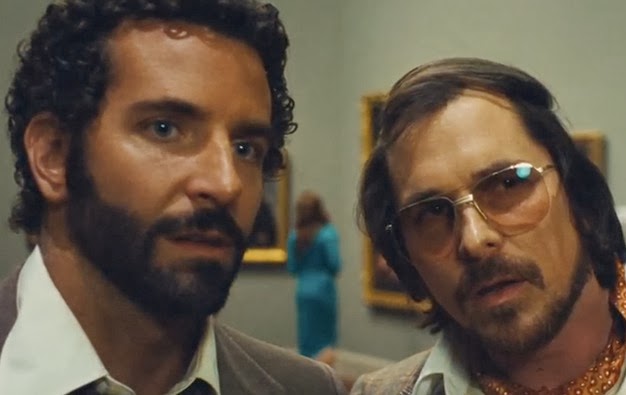 We have seven more days to see two more movies.

I won't get too cocky - it can be done, but the question of course is, will it?

You know me, I knew little about the flick, as I thought I might want to see it, so I keep away from press. I liked Silver Lining Playbook enough (I never thought it was out of this world, like some did), and it had the same writer / director (David O. Russell) and some of the same cast: Bradley Cooper, Jennifer Lawrence and Robert De Niro (he's waiting...and talking Italian).

Actually, five of the six "main" characters have been in one of the last two Russell films: Cooper, De Niro, Amy Adams, Lawrence and Christian Bale. Both Bale and Lawrence won Academy Awards for their roles in the Fighter and Silver Linings respectively. The other three were also nominated for their roles in his films. Not a shabby track record.

Bale, in my opinion was brilliant. Since he's in the first scene, maybe even first shot, I turned to 710 and whispered, "Batman has really let himself go!".

For his role, he was supposed to look that way, of course, being set in the late '70s - the black hole of fashion and hair. Bale nails it, but his character and the way he plays it is superb. For the role, he still brings a likable quality to the role of a schemer.

While Cooper did well, I never found his character that likable and maybe he wasn't supposed to be. I think we're so used to rooting for him, the actor, to win that's what one expects. Even with his curled hair, he is not hard on the eyes and that chest hair he sports when going to Studio 54 is not bad - but is it acting?

Lawrence is fine and I hear accolades about for her New Jersey housewife role. I'm not sure if this is how these women truly are / were, but they've almost become a parody of themselves, if that is possible. But I was more taken with Amy Adams in her role.

I'm not an Amy Adams fan. I thought she was the weakest link in Julie & Julia, the Master and Doubt. She sucked in Trouble with the Curve, but to be fair to her, everyone sucked in that movie - as did the movie itself. She comes off as so milquetoast in most everything she does, it's hard to think she has any range whatsoever. So I had zero expectations of her here and maybe that wasn't a bad thing. She played her role very well.

The biggest surprise was a role by Louis C.K. That, I was not expecting - good or bad. De Niro, well......let's just say, you've seen this role done before. Usually by him. It's no stretch.

There are no plot points given in this review here, other than it is a con man / women  / FBI storyline. Part of it is allegedly true - though I have no idea how much.

The soundtrack (not the actual physical soundtrack) is great, though I didn't try to make sure all the songs matched up to the era specifically - which I'm apt to do - but it brings the vibe that is needed to the movie. I really dug Duke Ellington's "Jeep's Blues".

I did a quick glance at all the movies we've seen so far in 2013 and American Hustle might be the best - my opinion, of course. Mind you, two of what we saw were hold overs from the 2012 season, so they count towards my goal, just not to what is best in this year.

Yes, American Hustle might be the best we've seen so far (though I'm betting 710 will say Gravity was his favourite), but we still have two more movies to see. Possibly.

High praise indeed. We get 'Hustle' in a few days time and it's a must for me if only 'cos I'm smitten by Mr Cooper, especially whenever he has facial fuzz. (Boy, but was he hot in 'Silver Linings'! When he's on screen I just see him rather than his acting.) But the film is getting good reviews here though maybe not so high as meriting so many award nominations. But it certainly looks like an all-round dream cast.

One of my friends on the facebook said it should have been called "Amy Adams' Sideboob".

I really really REALLY wanted to like this movie.

But I just didn't.

It was okay. It felt very Scorsese, and I hate his films. I'm not a mob-drama-gangta film lover.

I thought everyone did a good job, and it was interesting. But I never got fully invested and I actually fell asleep briefly about 1/3 of the way through.