When the Day is Short

Days start getting longer after today.

Well, let's rephrase, shall we?  Starting tomorrow, there will be more daylight for the next six months. That means more potential outdoor time for Petey. Which is good, because he's trying my ever last nerve.

You read last week that Petey found the cat fud, which made him itchy, to the point he's back on meds. And we moved the cat food, but.........being the hound that he is, Peter has overcome some adversity to get to said fud.

With his claws, Petey is not good on wood or laminate. Add to that complexity when stairs are involved. Yet lo and behold, he's gone pasty his alleged inability and fear to get to what he wants. The bastard. 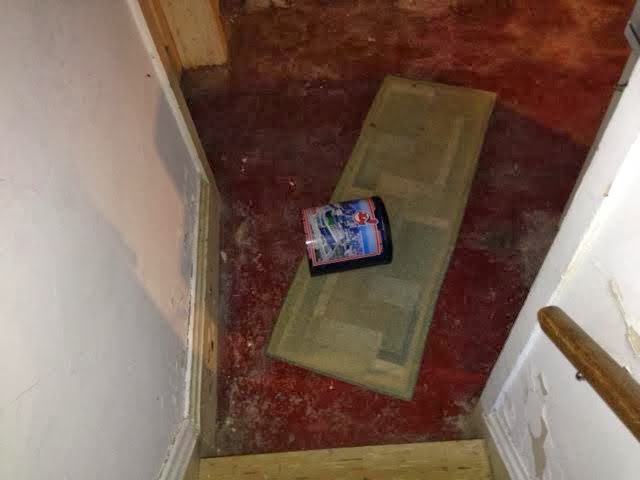 First - he made it to the basement landing and unlike last week of prying the lid off the tin, he accidentally knocked it down a flight of stairs. How the lid didn't come off is beyond me. This happened while I was out of the house. 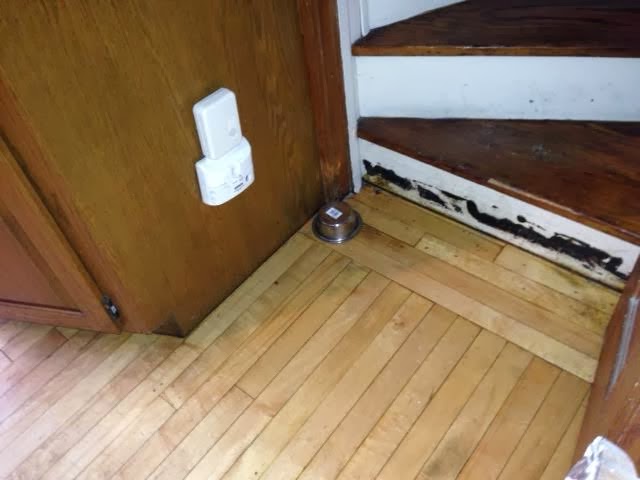 Second - he made it up the back stairs (servant stairs, don't you know!), ate Sophie's fud and knocked her bowl down the entire flight. This also happened when I was out of the house.

Third and Fourth (but no pics), I caught him at the top of the back stairs trying to eat Sophie's food...again. He almost looked guilty, until I realized he was scared to death of falling as he couldn't keep a grip on the stairs.

And then I saw he'd eaten her food which was back on the basement stairs (we tried a futile attempt at those rubber door stops. They are child's play to him). I refilled her bowl and turned around and heard crunching.  That damned dog was in the basement!!! He came up and was eating her food (again).

What I loved about it  - was Sophie was with him in the basement. Checking out to see what he was checking out. Hopefully he didn't find the litter boxes, but not much I can do about that now.

I finally made it to Homo Depot for a latch. 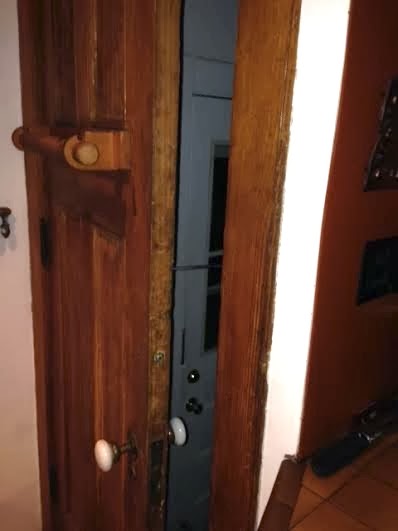 Sophie isn't thrilled with fitting in the door opening and Petey is frustrated that he can see and smell the food, but can't get to it anymore.

So, now that I'm (almost) over my frustration at doggie shenanigans, I have two pics to post of the culprits. Somehow, I have to feel Sophie was involved. 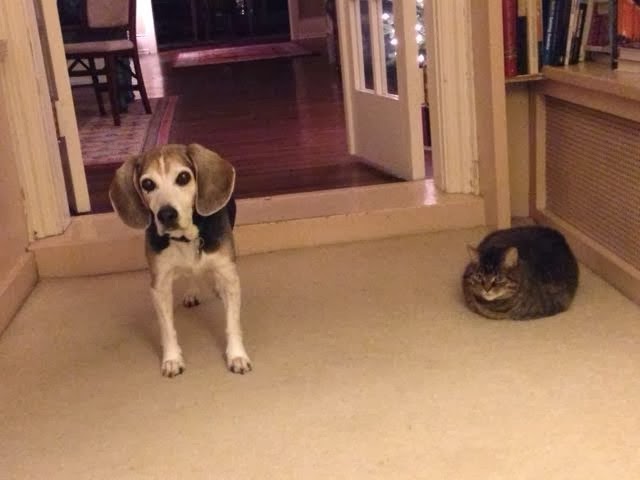 I haven't weighed Sophie lately, but this pic looks like she's HUGE. She not - she is just in winter-time mode. Besides reducing her food amount anyways, Petey has eaten most of it in the last week. In theory, she should be Karen Carpenter thin by this point. 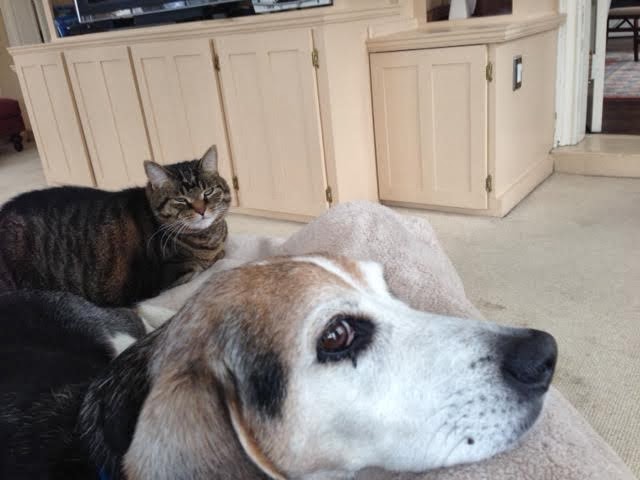 If it weren't for his snorting and kicking in his sleep, Sophie might actually curl up with him closer than this. But it's fun to see them together. I'm not sure she could have asked for a better canine (or feline) companion.

Song by: Martha Wainwright
Posted by Blobby at 12:10 AM

those two look so innocent - NOT! as long as sophie can squeeze herself through that opening, all will be right with the world.

It reminds me of the line in "Moonstruck"
"When you love them, they drive you crazy, because they know they can"